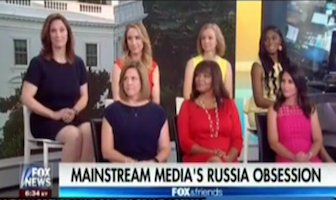 Desperate to pretend that Donald Trump’s Russia problems don’t matter to Americans, Fox & Friends put together a fake panel of “everyday” “moms from all walks of life” to relay that message. In reality, Fox made sure viewers got its intended message by stacking the panel with conservative activists.

EARHARDT: The mainstream media’s number one obsession still the Trump administration’s alleged ties to Russia. But do everyday Americans care about this? We brought in our panel of moms from all walks of life to find out. It’s a segment we’re calling “Parental Advisory.”

As a lower-third banner blared, “MAINSTREAM MEDIA’S RUSSIA OBSESSION,” Earhardt cited a poll she said found that “a lot of people” wanted to hear about “jobs and economic growth” the most and “Trump administration’s ties with Russia” the least.

Earhardt proceeded to ask the women questions designed to dramatize that result. “What are your concerns, as a mom?” Earhardt asked disingenuously.

What Earhardt didn’t mention is that these women had concerns as activists. Media Matters explains:

The panel featured seven women who, as they spoke, were introduced via on-screen banners using the following descriptions:

The first three women, who all had left-leaning opinions, were assigned identifiers related to their professions; Fox ensured its viewers knew McLaughlin and Osefo’s political leanings. But the other four women who all professed conservative political beliefs were identified only as mothers (one was also described as an “armed forces veteran,” but her current profession was omitted).

D’Addesi, for example, is a conservative Christian blogger and anti-choice radio host. Barnette is the founder of a “Christian conservative news” website.

It didn’t take long for the partisan talking points to come forward from the conservatives. “We have full confidence in our president,” D’Addesi said, “that he is going to do an amazing job with the economy. … He’s highly successful and we’re very confident in the team that he’s put around him.”

Barnette agreed, then ratcheted up the partisanship with attacks:

BARNETTE: I’m also concerned about the rampant amount of lawlessness that we’re seeing on the streets as well as throughout the ranks of our government. When I have to think twice about wearing a Donald Trump tee shirt because I don’t know what kind of liberal lunatic is going to meet me at the grocery store, I think that is a very important concern of ours today.

That’s a bigger concern than a president colluding with a foreign adversary? Predictably, Earhardt didn’t challenge Barnette. Instead, she called on the next conservative-activist “mom” who talked about wanting Obamacare repealed and replaced.

We know why Earhardt and her guests played along. But what’s the Democrats’ excuse? Not one of them called out the chicanery.

Even worse, Dr. Wendy Osefo, who identified herself as a Hillary-supporting Democrat, made herself an even bigger Fox News patsy. At about 5:00, when Earhardt asked the leading question, “What can Democrats learn from [Trump’s] win?” Osefo essentially advised Democrats to be more like Trump:

OSEFO: I think that what’s really important here is that Democrats need to know, going into 2018 and the midterms, we cannot have the same rhetoric. We need something new, we need new energy, and I think that that’s what Donald Trump brought to America, in essence, right?

I often tell my friends that, you know, a lot of times when we think of Obama, we think he brought hope and for a lot of people, whether you want to hear it or not, Trump brought hope to a segment of the population and that can’t be denied. So going into 2018, I would say for any Democratic leader, we have to think of new blood, new tactics. We can’t have the same, you know, rhetoric because it’s not working. We need something new here.

There are plenty of reasons to be critical of Democrats and their messaging. But to make this kind of argument on Fox News, you either have to be ridiculously naïve, and believe that an honest debate was Fox's goal, or willing to screw your own side to secure future Fox bookings.

Whatever her reason, we can probably count on seeing more of Osefo on Fox in the very near future.

Watch Earhardt’s dissembling below, from the July 13, 2017 Fox & Friends, via Media Matters.

CNN Panel Stunner: Half of Participants Regret Casting Their Vote for Trump

The president’s approval rating has plummeted to 36 percent in a new ABC poll. By Jen Hayden / DailyKos

CNN New Day host Alisyn Camerota sat down with six Donald Trump voters and their comments reflect exactly how much trouble the struggling popular vote loser really is in. It’s no wonder a new ABC News poll shows him to be the least popular president in 70 years: “Americans give President Donald Trump the lowest six-month approval rating of any president in polls dating back 70 years, punctuated by questions about his competence on the world stage, his effectiveness, the GOP health care plan and Russia’s role in the 2016 election.”

Watch as three of the six panelists raise their hands and explain why they regret their vote: