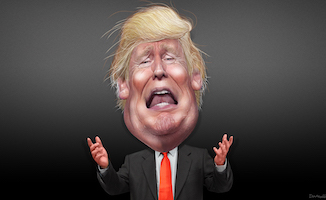 Poor Donald Trump had to endure his favorite network posting a graphic of a poll showing him losing to Joe Biden in six battleground states. And instead of threatening Vladimir Putin for putting bounties on American troops, he threatened Fox News for daring such disloyalty.

.@FoxNews gladly puts up the phony suppression polls as soon as they come out. We are leading in the REAL polls because people are sick & tired of watching the Democrat run cities, in all cases, falling apart. Also, now 96% Approval Rating in the Republican Party. Another 2016!

.@FoxNews weekend afternoons is the worst! Getting into @CNN and MSDNC territory. Watch @OANN & @newsmax instead. Much better!

Fox News was airing a segment about Trump’s bad polling as he tweeted this https://t.co/FmS49DX2If pic.twitter.com/9PROS7xaGN

Meanwhile, Trump does nothing to respond to Russia's escalations against the U.S.