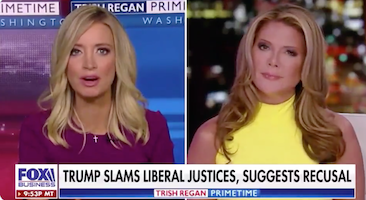 Just two days after our flashback to Kayleigh McEnany insisting that Donald Trump will make sure the coronavirus never reaches America, she has become his fourth press secretary in a little over three years, now that former “best person” Stephanie Grisham has left the job after nine months.

On Sunday, a tweet from CNN’s Andrew Kaczynski about McEnany caught our eye and we posted it. It's not clear if he had any advance inkling of her appointment. In the February 25th clip he posted, McEnany tells Fox's since-fired Trish Regan, "We will not see diseases like the coronavirus come here ... and isn't that refreshing when contrasting it with the awful presidency of President Obama."

On the same day Larry Kudlow said coronavirus was “contained” on Feb. 25th, Trump’s campaign spox made an even more bold claim.

“We will not see diseases like the coronavirus come here..and isn't it refreshing when contrasting it with the awful presidency of President Obama." pic.twitter.com/O0DDH3Rvkw

McEnany has responded like a true Trumper: failing to take responsibility, deflecting and dishonestly claiming she was taken out of context, that she was talking about Trump's China travel ban. Sadly for her, her unqualified claim that Trump has kept out the coronavirus, presumably via his travel ban, is on video for all to see forever. Since then, the death toll in the United States has risen to over 10,000 and the U.S. leads the world in the number of confirmed cases. Most of us can remember that we had no such pandemic under President Obama.

As Kaczynski notes in his tweet, on the same day that McEnany insisted the coronavirus would never come here, National Economic Council Director Larry Kudlow said the coronavirus was “contained … pretty close to airtight.”

Kaczynski had another McEnany flashback to remind us about today. This is a 2012 charmer from her:

How I Met Your Brother -- Never mind, forgot he's still in that hut in Kenya. #ObamaTVShows

And those are just some of her greatest whoppers in March. Here are a few of her earlier ones:

There are many, many more where those came from.

Trump's third press secretary, Grisham, distinguished herself in her nine-month stint by agreeing with Dear Leader that Never Trump Republicans "deserve" to be called "human scum" and never holding a single press briefing.

Any bets on how long McEnany lasts before we’re on to the fifth “best person” in the job?

Eyes On Fox commented 2020-04-08 11:08:17 -0400 · Flag
The MAGA cult is strange – bigly secret. No matter how many warning signs Trump signals via the White House revolving door that he’s not the sort of mentally ill person you want to work for, they line up for a chance to kiss his ass daily in the Oval Office. His butt must fart lavender and rose with the addictive properties of cocaine.

McEnany is not much different than those who preceded her. She’s a hyper-partisan motor mouth like Sarah Sanders and Stephanie Grisham. She’s also quite similar to Kellyanne Conway who refuses the to take the job. They get their face on some news segment and aggressively filibuster the segment with ridiculous Trump knob polishing. On Fox News they let them talk. On other outlets the shills brashly talk down the reporters getting even nasty accusing them of not giving them their due uninterrupted air time.

Unfortunately for McEnany or anyone who takes the White House press secretary job, there’s really not much to do. Trump is a mentally ill clinical narcissist drawn to a microphone like flies to 💩. Eventually they’ll get rolled out because in the fantasy Trump’s built around his deep insecurities there’s nobody who’s great enough to speak for him but himself.

Seems she’s promised to hold daily briefings … Good heavens! Journalists should be given bonuses for exposing themselves to a daily dose of the McEnany inanity virus (MIV), exposure to which is dangerous to one’s cerebral capabilities. The only vaccine (facts and the ability to respect them) is in desperately short supply.

scooter commented 2020-04-07 17:54:28 -0400 · Flag
She’s perfect! Another fluffer who wants to sleep with the Monster! She thinks he’ll treat her special, just like he did every other woman that’s fallen under his spell. She’ll get thrown under the bus too, only a matter of time.