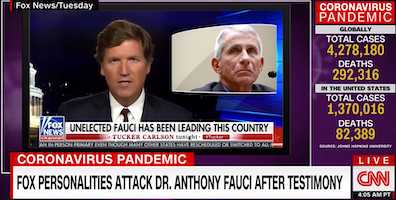 A CNN supercut of footage from Fox News on Tuesday night revealed how the network has launched a coordinated attack on Dr. Anthony Fauci, the director of the National Institute of Allergy and Infectious Diseases.

During a segment about clashes between medical experts and White House economic advisers on reopening the American economy, CNN’s Alisyn Camerota played a montage of Fox News hosts slamming Fauci this week — and she encouraged viewers to “see if you can spot the coordinated talking points.”

What followed were clips of Tucker Carlson, Sean Hannity and Laura Ingraham suggesting that Fauci is a Democratic deep state operative undermining Trump and, therefore, not to be trusted.

CNN political analyst David Gregory dismissed the smears as “not worth our time because they’re not making serious points.” Gregory is right in that the comments should not be worth our time but I call it dangerous folly to just shrug off the propaganda.

Fortunately, CNN’s John Berman hit the nail on the head. “I think it is important, frankly, because what Dr. Fauci is doing is voicing what the science is telling him,” Berman said, and the science is what Fox wants to discredit. “To attack someone who is merely voicing what his lifetime of experience in medicine has told him, I do wonder if that will undermine the faith of people inside this country,” Berman added.

Dr. Sanjay Gupta also nailed it. He likened the country, or at least the MAGA parts of it, to a patient who doesn’t follow doctor’s recommendations on how to handle a difficult medical condition “and then gets angry at the fact that they’re still not getting better, in this case getting angry at the doctor.”

“Nobody likes what’s happening right now,” Gupta continued. “We can get better but we’ve got to actually go through the treatment.”

And that is the problem for Fox News. They can smear Fauci, Democrats or whomever they want as much as they want and it will not make the coronavirus pandemic go away. But that doesn't mean the propagandists can't do damage while they're at it.

I’ll have more on the Fauci smears coming up. Meanwhile, watch the CNN take below, via CNN’s May 13, 2020 New Day, and Raw Story.

scooter commented 2020-05-13 19:51:48 -0400 · Flag
JFC! I just got off the phone with my sister who is a registered nurse and a MAGAt. We never discuss politics in the interest of family harmony but she just went off on a spree about how we need to start up the economy again. SHE’S A FCKING NURSE!!! AAAAHHHHH!!! Sorry for yelling but I am insane with rage. She’s telling me that there are no cases in her area, (Sacramento, CA), and all the hospitals are geared up with nothing to do, and people are starving cause they can’t work and nobody’s dying only old folks at nursing homes and kids don’t get it and it’s all OK, and yadda yadda yadda………FML. I may never speak to the btch again.

Sorry again for yelling. Thanks for letting me vent.