After Lawbreaking Atilis Gym Shut By NJ, Fox’s Kilmeade Suggests Owners ‘Key Yourself Right Back In And Open Up’ 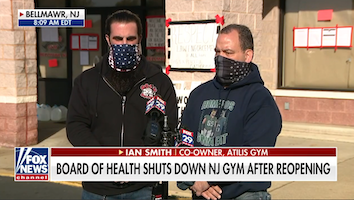 After the Atilis Gym was shut down by the New Jersey Board of Health, Fox & Friends’ slobbering praise for the defiant gym owners continued and now included suggestions that they just ignore the closure and open up anyway.

All week, Fox News has swooned over the gym owners as patriots for breaking the law and defying the state’s order for gyms to remain closed. In addition to the segment we posted on Monday, the show cheered on the gym again on Tuesday. Wednesday night, they got some love from Tucker Carlson. Yesterday, after the Board of Health shut down the gym, the Curvy Couch Crew, safe in their remote locations, couldn’t have been more supportive:

Cohost Ainsley Earhardt whined to co-owner Ian Smith, “You gave us hope, and now it’s taken away. How you doing? Ian, how you feeling?”

Smith called the shutdown “just a bump in the road.” He said, “We have our lawyers on it,” and that the gym will “reopen tomorrow.”

Cohost Brian Kilmeade “asked” if the gym had been padlocked or “Could you key yourself right back in and open up?”

Smith said they could but “we will not defy a health code order.”

Co-owner Frank Trumbetti said, “We stand by everything we’ve done which is non-criminal.” But, he added, “Right now, we will not be letting anybody in other than to do work to clean up, to get ready and to do work tomorrow.” Mediaite reported there had been a sewage backup at the gym on Wednesday that the owners blamed on someone clogging up the toilets with paper towels. Kilmeade brought up the matter and helpfully asked whether “there was something insidious going on there,” thus allowing the owners to suggest why, yes, it seems so.

During the discussion, someone just happened to walk by with a large sign saying, “The American people don’t know who’s worse, these out of control Dimocratic [sic] governors or the dishonest fake news media.”

Cohost Steve Doocy did his part for the cause: “You have looked at the best practices, best safety practices that they are all employing. You’re social distancing in there, you’re disinfecting, you’re doing everything that is state of the art, but because you’re in New Jersey and not, for instance, in Texas, there’s still that stay-at-home order regarding your gym, although you do say that you’re going to reopen tomorrow.”

Neither Doocy nor any of the other hosts, working remotely until at least June 15, said anything about going to the gym, themselves, to demonstrate to viewers just how safe it is.

“Our rights under the Constitution are protected,” Smith asserted.

Trumbetti said that starting tomorrow through Labor Day, “we were going to offer our pristine services for free to all active military and every veteran out there.”

"Wow, That’s really nice of you,” Earhardt gushed. “Everyone across the country is watching you ‘cause you gave us a glimmer of hope. We wish you all the best.” Then she asked them to tell viewers how to reach their GoFundMe page for their legal expenses.

You can watch Kilmeade, Doocy and Earhardt endorse lawbreaking behavior that risks contagion below, from the May 21, 2020 Fox & Friends.