What’s Behind The Fox News Breakup With Donald Trump? 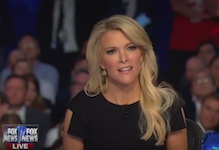 As we’ve repeatedly noted, Fox News has been one of Donald Trump’s biggest cheerleaders, even as uber boss Rupert Murdoch decried him. So why did Fox target Trump in last night’s debate? I think there’s only one answer: self-interest.

Roger Ailes biographer Gabriel Sherman has some interesting deets on what happened:

It was a breakup days in the making. Over the past week, Ailes and his executives had been strategizing about how to deal with Trump. The prospect that the Donald could hijack the debate presented programming and political perils for both Ailes and his star anchors. What if Trump started insulting his GOP rivals onstage? Or broke the debate rules? During a meeting at Fox late last week, according to a source, senior Fox executives discussed a more worrisome scenario: What would happen if Trump won over the audience and moved the crowd to boo moderators Bret Baier, Megyn Kelly, and Chris Wallace on live television? What if Trump was able to direct his base of supporters to stop watching Fox? To prevent that from happening, Ailes needed a way to keep the audience firmly on the side of his moderators.

Fox’s goal of throwing Trump off his game was crystal clear in the very first question, when moderator Bret Baier asked for a show of hands of those "unwilling tonight to pledge your support to the eventual nominee of the Republican party and pledge to not run an independent campaign against that person?” Of course, Baier knew that Trump has threatened to run as a third-party candidate. Even more striking than the question was how Baier lectured Trump, Republican-to-Republican, after he raised his hand.

BAIER: To be clear, you’re standing on a Republican primary debate stage, the place where the RNC will give the nominee the nod and that experts say an independent run would almost certainly hand the race over to Democrats and likely another Clinton. You can’t say tonight that you can make that pledge?

Megyn Kelly’s soon-to-follow question was nothing less than a gotcha: “Mr. Trump, one of the things people love about you is you speak your mind and you don’t use a politician’s filter. However, that is not without its downsides and in particular, when it comes to women. You’ve called women you don’t like, “fat pigs, dogs, slobs and disgusting animals.”

These were not rogue questions. They were not just pre-prepared but tweaked in advance as well.

We don’t know whether Fox used the debate to turn on Trump out of business or political considerations – or both. Sherman writes:

It’s unclear what, ultimately, convinced Ailes to let his moderators go after Trump. He may have wanted to shoot first to prevent Trump from damaging Fox in a live situation, as they say in the business. Perhaps Murdoch got to Ailes. Or, perhaps, Ailes just wanted good television. (Fox did not respond to a request for comment.)

Or maybe Ailes decided Trump’s moment was up and it was time for him to get off the stage and let the real contenders get to work.

Media Matters’ Hannah Groch-Begley has another theory, that Fox wanted to use its moment in the spotlight to look like a legitimate journalism outfit, willing to hold its own side’s feet to the fire at a time they knew a lot of people unfamiliar with its illegitimate tactics would be watching. While Kelly’s question for Trump garners exactly the attention she undoubtedly aimed for, how many (other than Media Matters and I) are asking why Kelly waited until then? Fox gave Trump nearly five hours of airtime in the last three months, including time on on The Kelly File. Yet nobody thought it important to ask about his misogyny until last night?

Whatever motivated Fox's turnaround at the debate, it was almost surely not principled journalism.

Dave Wright commented 2015-08-08 12:19:56 -0400 · Flag
It is ratings oriented. Kelly & the rest are well paid to take a little abuse. Fox wants two things – to win the next election & the ratings war on cable. They have already achieved half their goal. Now they are trying to decide who has the best chance on the Republican side. There is a long way to go.

Ellen commented 2015-08-08 02:44:09 -0400 · Flag
I watched the whole debate, plus the after shows and the “kids table” debate earlier in the day. Yes, Fox was tough on all the candidates but I also think they targeted Trump. Maybe Fox thinks there should be no hard feelings – just like Trump thinks the women he’s insulted should laugh it off as just part of “frank” talk – but that is not how Trump operates… as his ongoing attacks on Fox indicate.

While I do think Fox will continue to be friendly to Trump, as seen in the Fox & Friends discussion, and that people like Hannity will continue to openly admire him, I do not think the overall coverage will be anything like the fawning supportiveness seen before the debate.

Unless you watched the whole thing, you might not realize that the Foxies went after all the candidates, and mostly in a very hostile tone.

Also, checking in from time to time during the day today, I did not see any backtracking by the very pro-Trump Fox hosts, from Bolling to Hannity.

Fox News exists primarily to make money, and stirring up “excitement” in this debate was mandatory. Who’s going to stir up the most excitement? Donald Trump. Best yet, “Ain’t I Hot” Kelly venting her animus towards Donald Trump.

IOW, I don’t see anything resembling a “breakup” with Trump that occurred overnight.

If I had to sum it up in two words, I’d have to say, “Rupert Murdoch.”

‘Ol Rupy may have caved to Ailes previously over The Combover (http://www.newshounds.us/roger_ailes_wins_the_battle_with_rupert_murdoch_over_donald_trump_081415), but I think, coupled with Little Toddy Starnes’ debate-long temper tantrum where he trashed his employer, Fox (http://www.mediamatters.org/blog/2015/08/07/are-you-freaking-kidding-me-foxs-starnes-spends/204827), Rupert suddenly grabbed his nutsack, reasserted himself, and said to Ailes: “I’M the boss. If I say we’re done with Trump, we’re DONE. Don’t like it? You and Starnes can both go see if MSNBC will have you” . . .

truman commented 2015-08-07 19:54:25 -0400 · Flag
Jabba the Ailes loved the ratings and advertising dollars that T-Rump brought in to Fux Noise. But when it started to appear that T-Rump might actually win the GOPiggie nomination, Jabba had to put an end to his bromance. No way that T-Rump could ever defeat Hillary. So the hit order went out to Blackroots Barbie and Bret Goodhair.

Eyes On Fox commented 2015-08-07 19:26:35 -0400 · Flag
Interesting to see into the inner workings of Ailes’ operation regarding The Donald. Never pondered Roger fretting, for example, Trump might hurt the Fox News brand.

Obviously a network with a co-host advising women to make their man a sandwich after sex as a thank you isn’t too concerned with misogyny or women’s issue. If I recall, Bret Baier pressed for clarification on Trump refusing the loyalty oath. Never any clarification was asked of the various candidates callous to women’s health regarding abortion.

I pretty much assumed either Ailes determined Trump is unelectable or was upset The Donald isn’t a true Republican. The 2 zingers of the night point that way. Namely, Megyn asking The Donald when he 1st became a Republican. Ailes is an ideologue as are his key talent/managers. Along those lines we know Ailes demands team loyalty and egomaniac Trump is only loyal to The Donald. It wouldn’t surprise me if Baier was ‘encouraged’ to administer the loyalty oath.

d d commented 2015-08-07 19:14:14 -0400 · Flag
Media Matters’ Hannah Groch-Begley has another theory, that Fox wanted to use its moment in the spotlight to look like a legitimate journalism outfit, willing to hold its own side’s feet to the fire at a time they knew a lot of people unfamiliar with its illegitimate tactics would be watching.
Ellen
———

“The post-debate consensus is in: “Fox News Moderators Bring a Sharpened Edge to the Republican Debate Stage,” raves the Times. They proved the haters wrong!

This was an opportunity to get certain people to write something along those lines, yes, sure. And plenty of people took that bait, from the National Journal (“In a sea of men, two women stood out during Thursday night’s Republican presidential debates: Carly Fiorina, who dominated the undercard, and Megyn Kelly, who charged hard after Donald Trump in the main event.”) to Slate (“Fox News being Fox News and also Fox News at its best.”) to HuffPo (“Fox News Was The Real Winner Of The Republican Debates”).

Obviously one benefit of rarely demonstrating basic professional competency as a news organization is the lavish praise that rolls in when you sort of convincingly fake it.

Yes, in case you didn’t know, Ailes’s network is occasionally capable, when company’s coming over, of dressing up in grown-up clothes. Its more embarrassing personalities — the same personalities that host the channel’s most-watched shows and determine its overall voice — are sent on lengthy errands, and the vaguely plausible “serious news anchor” cosplayers are trotted out. This impressed those who apparently thought they were going to let Steve Doocy and Greg Gutfeld host this thing."

“Ailes clearly wants to play kingmaker, and he will crown the most conservative, but plausibly electable, candidate possible. What looked like a roast was actually the start of a coronation.”

NewsHounds posted about What’s Behind The Fox News Breakup With Donald Trump? on NewsHounds' Facebook page 2015-08-07 18:30:12 -0400
No, Fox did not get bitten by a principled journalism bug.