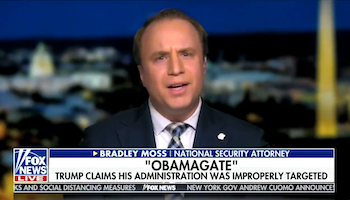 I wrote yesterday that Fox is starting a drumbeat if not to arrest former President Barack Obama, former Vice President and presidential candidate Joe Biden and/or other Obama administration officials, at least to smear them as criminals. I don’t know how far Trump and Trump TV will go with this or how successful the smears will be given that we’re in the middle of a pandemic and Obama is way more popular than Trump.

But whatever the plan, Moss temporarily stopped it in its track on Fox News @ Night last night.

Watch it below and hope we see more of Moss and his kind on Fox in the future.

This... All of this pic.twitter.com/y4V0rQJuN4