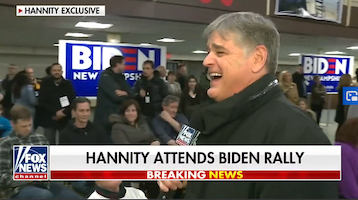 Sean Hannity was treated with courteous criticism when he dropped by a Joe Biden campaign event to which he was not apparently invited. Contrast that with the menacing hostility real reporters receive at a Trump rally.

The crowd was obviously filled with non-fans, but everyone was well-mannered. Hannity dropped his badgering bullyboy persona and put on his Irish charm for some good-natured banter. Too bad, nobody blasted him – civilly, of course  - when he asked, “Tell me one thing I’ve ever said that’s false.” In fact, Fox News’ own research team has acknowledged he promotes falsehoods and misinformation. Russia reportedly has used Hannity broadcasts to spread its own propaganda.

But here’s my biggest takeaway: Donald Trump attacks reporters, not liberal opinion hosts, at his rallies as “enemy of the people,” "scum," "lowest form of human life," etc. Last year, a BBC journalist was assaulted during a Trump rally. Hannity has publicly approved of Trump's deliberate incitement of his supporters’ hostility. In fact, after CNN's Jim Acosta was harassed at a Trump rally, Hannity suggested he'd rumble with Acosta "in a schoolyard" but refused to allow him on the air.

Just last week, Rep. Devin Nunes, who seems to spend all his time suing media outlets that criticize him, told approving Fox host Laura Ingraham that “the most important thing” Donald Trump has done is to have “finally outed the media” “assassins.”

Watch Hannity posture below, from the February 10, 2020 Hannity show.

Douglas Bruner commented 2020-02-18 23:47:07 -0500 · Flag
If anyone had even brushed up against him just walking by, he would’ve said he was brutally attacked by “Un-American radical leftist antifa who are trying to take your guns and make your kids gay” or some other neofascist BS to get the trumpanzees foaming at the mouth.

Rw Fan commented 2020-02-12 20:02:58 -0500 · Flag
Hannity was hoping to get heckled, so he could run a segment and whine like a little bitch. Remember when CNN was getting verbally abused at a Trump rally last year and Hannity smirked. Total asshole.