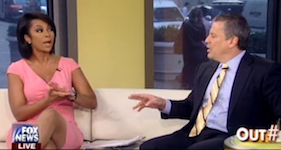 The ladies of the Hiked Skirt Brigade cohosting Outnumbered got a serious case of the vapors hearing their colleague get upset about assaults at Donald Trump events. After failing to change the subject and out-debate their own guest, the Trumpettes finally went to a commercial.

The discussion was supposed to be about Hillary Clinton getting “rattled” by "fringe candidate" Bernie Sanders. But Fox Business’ Charles Gasparino, the show’s #OneLuckyGuy, was obviously so outraged about the violence at Trump events that he steered the discussion that way.

“They don’t go crazy at Bernie Sanders rallies,” Gasparino said. But at Trump rallies, “I see angry people fighting. …I hear about reporters getting assaulted. …If you’re telling me that’s normal, civil behavior, that is not.”

Cohost Andrea Tantaros didn’t want to hear it. “What does that matter?” she asked.

“It does matter,” Gasparino shot back. “When you have a candidate that basically does not tamp down on the raw emotion of the people in the audience, that’s a problem.”

“We’re not arguing whether violence is a problem, Charlie. It’s like a false argument,” Tantaros replied.

“You don’t think what’s going on in those rallies is a problem?” Gasparino persisted.

“That’s not what we’re debating, Charlie,” she said dismissively.

It’s no surprise that Tantaros would think violence is no biggie. This is the woman who asked her radio show listeners to “do me a favor” and punch an Obama supporter “in the face.”

But what’s cohost Sandra Smith’s excuse? She asked impatiently, “Charlie, Where are you going with that?” As if assaults at a presidential candidate’s event were not worthy of attention on a news show.

Of course, what she meant was not to put conservatives in a box. Because when liberals get demonized “in a box,” Faulkner doesn't mind.

But when Gasparino didn’t back down, Faulkner began to get visibly annoyed. She ridiculously suggested that Gasparino was not credible because he had said the violence had happened at every rally and then “almost” every rally.

“Something may have happened at a rally,” Faulkner said, as though there hasn’t been plenty of evidence that violence has repeatedly happened. “I just think we gotta dial up that fairness in that situation that takes it one by one.”

Gasparino agreed. But, he added, “Don’t let him off the hook for this,” meaning Trump.

There was dead silence for several moments.

Then the hosts called for a commercial break.

Watch it below, from the March 11 Outnumbered.

Just have the helicopter standing by.

Zebbie Smith commented 2016-03-11 16:32:41 -0500 · Flag
All I can say is Charlie is right & if they are really willing to sit there & not condemn it then why are they even on. Had this been happening at a Rubio or Clinton or Cruz rally they would be raising all kinds of cane. I was nice & not going to use the word I was going to use. This told me all I need to know. This is why I don’t watch anymore. They have taken sides & that side is Trump. I can remember them having lots of words to describe what has happened in other stories . But they are protecting Trump. That may bring them down.