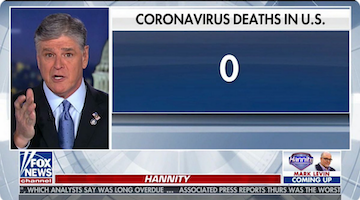 Fox News’ misinformation about the coronavirus has come back to haunt it via a lawsuit that specifically cites Sean Hannity and Trish Regan’s attempts to downplay the pandemic as “willfully and maliciously” disseminating misinformation that represents “unfair and deceptive trade practices.”

Last week, Vanity Fair special correspondent Gabriel Sherman reported that Fox News has worried that its misleading coverage of the coronavirus (COVID-19) pandemic could expose the network to lawsuits. A few days later, Law & Crime’s Aaron Keller wrote an in-depth legal analysis stating that while such a lawsuit would be “neither an easy nor likely successful task,” he did not rule out the possibility that “a very creative and diligent lawyer” could prevail.

Now, we may be about to find out;

4.2 In February and March of 2020, at various times that will be shown, including the March 9, 2020 broadcasts of Sean Hannity and Trish Reagan, Defendants acted in bad faith to willfully and maliciously disseminate false information denying and minimizing the danger posed by the spread of the novel Coronavirus, or COVID-19, which is now recognized as an international pandemic.

4.3 This misinformation was disseminated to further Defendants’ business plan and to sell advertising by creating controversy through the dissemination of false information regardless of the reasonably foreseeable adverse effects such misinformation would have upon the American public and public health and safety. Such conduct constitutes unfair and deceptive trade practices in the broad stream of intra-and international commerce.4.4 As a result of this misinformation by this dominant subscription news network, a continuing falsehood has been fostered that the virus is a “hoax”, a “conspiracy,” and that it is no more dangerous than common influenza.

We’ve written a lot about Fox’s coronavirus misinformation, including from Hannity and Regan. But personally, I think Fox’s Dr. Marc Siegel downplaying the hoax was the worst. He said about COVID-19 on the March 8 Fox & Friends, “worst case scenario, it could be the flu” and agreed with host Pete Hegseth that the more you know, “the less there is to worry about.” (He’s now slamming unpreparedness for the pandemic but giving himself and Donald Trump a pass.”) Siegel is also a professor of medicine at NYU Langone. But I digress.

The Seattle Times reports about the lawsuit:

Yakima attorney Liz Hallock, who is running for governor as a Green Party candidate, is representing WASHLITE in the lawsuit against Fox News.

“We are not trying to chill free speech here. But we believe the public was endangered by false and deceptive communications in the stream of commerce,” Hallock said in phone interview Friday. “There are a lot of people who listen to Fox News, and they’re not taking the recommendations of public-health officials seriously. This is not about money; it’s about making sure the public gets the message this is not a hoax.”

According to Hallock, several members of WASHLITE live in King County and one of them has COVID-19, the respiratory disease caused by the virus.

Hallock said her clients are seeking only nominal damages and reasonable attorney’s fees. Ideally, she would like a judge to find Fox News violated the Consumer Protection Act and to tell the media organization to stop disseminating false information about the virus. She’d also like to see Fox News issue a clear retraction and an apology to viewers.

She said the classic example to demonstrate the limits of free speech is someone yelling “Fire!” in a crowded theater when there is no danger. In contrast, Hallock said of Fox News: “They’re yelling, ‘There is no fire!’ when there is a fire.”

As you’d probably expect, Murdoch and Fox are threatening an aggressive response, including seeking sanctions, i.e. a financial penalty, from the plaintiff. From The Daily Beast:

The conservative outlet fired back—in a statement provided to The Daily Beast, and attributed to Lily Fu Claffee, Fox News Media’s general counsel—that WASHLITE’s lawsuit is “Wrong on the facts, frivolous on the law.”

Claffee added, “We will defend vigorously and seek sanctions as appropriate.”

But Fox may have met its match. More from The Daily Beast:

WASHLITE board member Arthur West, a non-lawyer and former automobile mechanic who earns what he describes as a handsome living as a professional public-interest plaintiff, told The Daily Beast that he’s not impressed by Claffee’s vow to seek retribution: “We are not afraid of the big bad Fox.”

As for possible sanctions against him and his group, “I’m pretty sure they’ll try something like that, because that’s what bullies do,” West said…

John McKee commented 2020-04-05 18:43:00 -0400 · Flag
Bravo. Even if it turns out that Fox and its creatures cannot be punished under existing law, the publicity and the discussion it engenders is going to be devastating for their reputations. A lot of water is yet to flow under this particular bridge, but there’s no doubt the country will be howling for vengeance against those who were responsible for the terrible outcome.