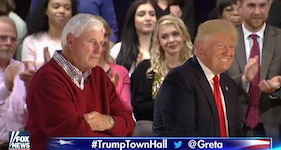 During another hour-long town hall with Donald Trump, host Greta Van Susteren just happened to trot out basketball coaching great Bobby Knight to help stump for Trump in the crucial state of Indiana.

What a coincidence that this infomercial, I mean town hall should occur just as Indiana has become the most important primary state – which Trump may have trouble winning.

Of course, there was no mention of Knight’s bizarre introduction of Trump at a rally earlier in the day. Van Susteren was too busy gushing over Knight who would, in turn, build up Trump.

"And now a special guest, someone who certainly doesn’t need an introduction here in Indiana and probably not any place across the country," Van Susteren said excitedly in her introduction. "Former Indiana University basketball coach Bobby Knight is here!"

Van Susteren asked some really penetrating questions – if you wanted to hear a variety of reasons to vote for Trump.

“Coach, why are you a Trump supporter?” was Van Susteren’s first hard-hitting question. She followed that up by asking “Who contacted who?” to get Knight’s support for Trump. That just happened to open the door for Trump to tell what he thought was an amusing anecdote on the subject that I’m sure Van Susteren had no idea was coming (not).

Next up, a question from a member of the audience, a World War II veteran who said he had “tremendous respect for the general, Bobby Knight.” His question was for Trump: “How would you compare your successful career and philosophy with Coach Knight?”

Trump spent the next 27 seconds praising Knight. It may have been the longest time span ever that Trump went without boasting about himself.

But Knight made up for the dry spell by returning the favor and showering Trump with praise. “Let me say another thing about Mr. Trump, and I think we’re a little bit alike in that regard. If we’re involved in something where we want to win and particularly something that’s necessary, if there’s something out there where we need to win, we’re gonna try to beat your ass every time we can."

The sea of white faces in the audience rose to their feet, cheering.

Watch it below, from the April 27 On The Record.

Andre Braido commented 2020-04-22 09:38:52 -0400 · Flag
Say what you will about Bobby Knight’s temper, most people in Indiana LOVED him. All the cussing, hitting, choking and throwing things resulted in some of the best basketball this state has ever seen. His antics were “just Bobby being Bobby.” As long as he kept producing winning teams no one cared. I think he probably won tRump some votes.
www.recantodossonhos.com.br

Eyes On Fox commented 2016-04-29 07:08:43 -0400 · Flag
Forgetting Knight is as big a bully as his hero Trump, he’s an even bigger idiot. So at Der Furor’s rally he’s got this huge boner for The Donald gushing Trump is Truman reincarnated and how Truman saved billions of Americans dropping the bomb on Japan. Billions? Seriously?

radpat_USA commented 2016-04-28 16:47:07 -0400 · Flag
I heard Bobby Knight has not lived in Indiana since retiring from his coaching job there so if this true what would his actual relevance be?

Janet Tuhey commented 2016-04-28 16:38:23 -0400 · Flag
Say what you will about Bobby Knight’s temper, most people in Indiana LOVED him. All the cussing, hitting, choking and throwing things resulted in some of the best basketball this state has ever seen. His antics were “just Bobby being Bobby.” As long as he kept producing winning teams no one cared. I think he probably won tRump some votes.