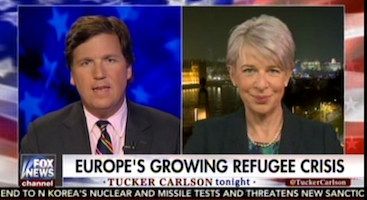 When a terror attack hits a country just a few days before an election, any responsible news anchor would look for calm and dispassionate analysis. But not Fox host Tucker Carlson! In the wake of the shooting of some French policemen in Paris yesterday, He booked the bigoted hate-monger, Katie Hopkins, and, while he was at it, let her use his platform to promote the kindred spirit running for president of France on Saturday. And then he endorsed Hopkins' endorsement.

NewsHounds’ Priscilla once aptly described Hopkins as a British Ann Coulter, based on these and other examples of Hopkins behavior:

She doesn’t let her children play with lower class children with names that she doesn’t like.

Has said fat people are lazy.

Has said that “women don’t want equal treatment, they couldn’t handle it if they got it. It’s a tough world out there.”

Commented that “Ramadan typically brings a spike in violence in Middle East. I get grumpy when I don’t eat - but I don’t blow things up. Religion of peace.”

“I don’t believe there is,” Hopkins said gravely. “We should send the military to stop the boats.”

From there she went on a hate-filled rant that included a complaint about “the collective kind of mourn about this baby that got washed up on the beach.” She was referring, of course, to this little boy.

“We’re still paying the price for that now,” Hopkins sneered, referring to an increase in the number of refugees that sympathy for the boy elicited. “We have charities that are providing a ferry service from Libya to Italy, direct.”

Carlson – who would have undoubtedly interrupted to badger and denigrate a liberal guest by now – listened in rapt silence. There was almost a look of awe on his face.

The conversation went on in this vein until about 2:44 when Hopkins made an explicit plug for Le Pen.

“She’s not far right, she’s just of the right and she is in the right,” Hopkins declared, before moving on to attack Le Pen’s rivals.

It’s no surprise a woman like Hopkins would support a candidate like Le Pen. She’s the Breitbart-favored candidate who once stood on trial for inciting religious hatred toward Muslims. Britain’s The Telegraph wrote that her party “began life as a dubious protest party of xenophobes, anti-Semites and die-hard fascists.”

It’s also no surprise that Carlson didn’t want to tell any of his viewers about that. Instead, he gushed, “You are highly awesome, Katie Hopkins, I have to say.”

Hopkins returned the love. “And you are too, Tucker Carlson,” she said. Then she launched into her next hateful diatribe, this time against European leaders who are less bigoted than she and Le Pen.

Remember, Carlson is the host that Fox chose to replace Bill O’Reilly, supposedly as part of Fox’s commitment to “the values of trust and respect.” See the kind of “respect” we have to look forward to, below, from the April 20, 2017 Tucker Carlson Tonight.

Eyes On Fox commented 2017-04-22 09:25:45 -0400 · Flag
Oh Tucker. You talk of a deluge of people coming from Africa and the Middle East then wimp out by not saying what you really want to – “brown skin and funny praying cultural change” – and just say “a vast encampment for the world’s poor”.

Right-wing bigots like Tucker have become so effective at pushing this narrative, even people like myself who should know better start thinking this is the reality roiling Europe. However, on Bill Maher’s show last night Brit David Miliband, head of the International Rescue Committee, pointed out the larger cultural backlash against immigration isn’t, say, Syrians but other Europeans looking for work such as Poles.

So like dumbass Trump riling up right-wing bigots against “Mexicans” when all the growth in illegal immigration over the past decade in America is people overstaying their visas, a majority of whom are Asian, bigot Katie Hopkins goes for the darker skinned bogeymen.

Like immoral asswipe Trump, Katie has no empathy for people fleeing violence. Unsurprisingly, über Christian Tucker Carlson has no empathy either for the “least among us” [Luke 9:48].

Katie, unlike wimp Tucker, doesn’t hold back mouthing the dog whistle phrase “keep France for the French”. Bingo! Want to live in France? No non-whites and/or non-Christians need apply.

Ironically, she bashes Emmanuel Macron for inherited wealth and his business creds yet Trump sycophant Tucker doesn’t see any irony in what his guest screech is ranting. Tucker calls these observations “highly awesome”.

Katie fits perfectly into a right-wing line-up of raging assholes like Alex Jones and Ann Coulter.