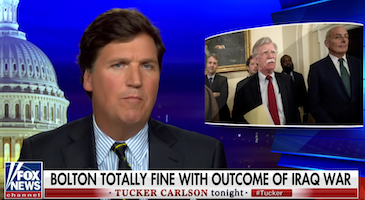 Tucker Carlson’s blistering attack on war hawk and national security adviser John Bolton, a Fox News colleague for more than a decade, was something you almost never see on Fox News. Yet this almost-principled stance was slathered with Carlson dishonesty.

Carlson’s principles only took him so far. He bent over backwards to suggest that the so-called liberal media attacked Donald Trump “for not killing enough people” when he called off a military strike on Iran (neatly overlooking the bloodlust on Fox). To anyone without an automatically-jerking Trumper knee, it could not have been clearer that Carlson’s real target was his own former colleague and Trump’s current national security adviser, John Bolton.

Carlson began his jaw-dropping monologue by laying down his anti-CNN credentials. He played a clip of CNN National Security Analyst Samantha Vinograd saying that Trump’s decision to strike militarily against Iran and then call it off shows “gross disorganization and a president who can’t seem to make up his mind, even on something as important as a military strike on Iran.”

In no way was that an endorsement of killing more people, as Carlson falsely suggested, but a commentary on Trump’s incompetence on Iran.

Yet Carlson – who never actually defended Trump’s handling of Iran - slyly made it look otherwise by attacking CNN. “Only in foreign policy circles do people say things that stupid,” Carlson declared. “In fact, last night was a high point in the Trump presidency.” A high point? For not doing what he had planned to do? Or for listening to you, Tucker?

Make no mistake, I’m glad Trump called off the strike, whether out of some never-seen-before sense of decency, a cue from Vladimir Putin, political calculation or because of the persuasive powers of Carlson. But not doing something you almost did is hardly a big achievement.

But Carlson knew whom he was addressing, both in and out of the White House. He went on to suggest, without any actual evidence, that Bolton is an enemy of Trump and maybe even advocating for war against Iran to destroy him:

CARLSON: Ill-advised wars are like doing cocaine, the initial rush rises your poll numbers, but the crash is inevitable. And in this case, it would be horrible. The hangover from an Iran war will last years. Iran is not Syria or Iraq. It's a big, rich, sophisticated country with an ancient culture and a cohesive population.

In some ways, it's an impressive place, not at all like the chintzy prefab capitals of the Arab world like Riyadh or Dubai. We could beat Iran, but it would not be easy. It would cost trillions of dollars, many thousands of Americans likely would die. China would love it. They'd be the only winners in that conflict.

Now, one of their key allies is the National Security adviser of the United States. John Bolton is an old friend of Bill Kristol's. Together they helped plan the Iraq war.

In addition to Carlson’s dishonest attempt to depict Bolton’s current position in the White House as Never Trumper Kristol’s fault, Carlson conveniently overlooked the fact that Bolton came straight from Fox News, where he arrived after leaving the Bush administration to become a paid contributor in 2007. There’s no way Trump didn’t know who and what Bolton stood for when he joined the administration.

Despite the BS, Carlson's criticism of Bolton was right on target

Having pretended to establish that Bolton was not a Fox News/Trump creature, Carlson let him have it. He blasted Bolton with clips of his support for regime change in Iraq and Syria. Followed by this:

CARLSON:  Keep in mind there are literally slave markets operating in the streets of Tripoli right now. No problem though. Bolton is fine with that. He is fine with the outcome in Iraq, too. That wasn't a disaster either.

According to John Bolton, it was a raging success. We killed hundreds of thousands of people, lost thousands of our own troops spent more than a trillion dollars all to eliminate a WMD threat that, despite John Bolton's assurances, never existed in the first place.

Bolton is glad we did all of that. Really happy about it. That's demented. Normal people don't talk like that. There's nothing normal about John Bolton.

Carlson next played a clip of Bolton advocating regime change in Tehran and promising to “celebrate” there in 2019.

CARLSON: In other words, [a military strike on Iran] has been in the works for years. John Bolton is that kind of bureaucratic tapeworm. Try as you might, you can't expel him. He seems to live forever in the bowels of the federal agencies, periodically reemerging to cause pain and suffering, but critically, somehow never suffering himself.

His life really is Washington in a nutshell, blunder into obvious catastrophes again and again, refuse to admit blame, and then demand more of the same. That's the John Bolton life cycle. In between administration jobs, there are always cushy think tank posts, paid speaking gigs, cable news contracts.

War maybe disaster for America, but for John Bolton and his fellow neocons, it is always good business.

Watch Carlson all but advise Trump to fire Bolton below, from the June 21, 2019 Tucker Carlson Tonight.

John McKee commented 2019-06-23 22:35:46 -0400 · Flag
Whatever has gone on behind the curtain, having Bolton out of favour (and a job?) can only be a positive development. Trump has done enough damage inside America, let alone on the world stage.

Tucker’s analysis of Bolton isn’t bad. I’ve thought pretty much the same. He missed a recent Bolton editorial which gets more to the point of actually calling for war with Iran but I can forgive him for that.

Untouched on TrumpTV™ here is why would Trump hire a “tapeworm” in the first place? Because he was formerly a Fox News talking head? Which begs the question why did Fox News hire a “tapeworm” to be their go-to guy on foreign policy.

It’s also clear Trump didn’t put much thought into his oversight over the military in his role as Commander-In-Chief. If Trump’s story can be believed – and, frankly, I don’t – the military wasn’t forthcoming in telling him important details and he initially lacked the intellectual curiosity or capacity to ask. Is it true that someone – probably a right-wing talking head like Tucker – clued him in? If so, it’s enormously disturbing.

Talking Toilet Brush Bolton never saw an international problem that couldn’t be improved with a bloody, costly war. Some say that when he fantasizes about a nuclear war with Iran, he excitedly sprouts a tiny woody.