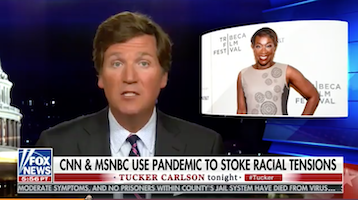 Tucker Carlson’s white nationalism is disgusting enough but making racial attacks on African Americans Joy Reid and Don Lemon for their concern about black and brown workers being forced back to work in the middle of a pandemic – and pretending it’s because he hates divisiveness makes Carlson especially odious.

On Monday, Carlson said, “If there’s anything positive to come out of the tragedy, it is the renewed closeness that many Americans suddenly feel with one another.” But before long, Mr. Positive called Reid “an open race hater who spins lunatic conspiracy theories about plots against citizens based on their skin color.” He accused Lemon of having “decided that the real lesson of this pandemic is that we need more racial division.”

Read my post at Crooks and Liars for more.

Fox’s newest (to me) compliant lib Zaid Jilani couldn’t miss the point by more distance if he were phoning it in from fictional planet Tatooine (in a galaxy far, far away). Joy Reid isn’t trying to characterize COVID-19 by race. Leave that ironically to the man whose butt Tucker loves to sniff, Trump, and his “Chinese virus”. No, Reid is pointing out PoC are disproportionately affected by both a recall to work and the infection rate. A hint to Tucker: You think those two things could be related?

Oh, and nice touch Tucker sliming another network for a sexual harassment scandal. Your total lack of self-awareness can be forgiven because we know your head is stuck up Trump’s ass at the moment.