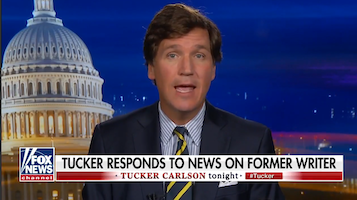 Tucker Carlson offered no contrition for having made Blake Neff, a blatant racist, sexist and homophobe, his top writer. If anything, Carlson sounded sorry to have lost him.

In the middle of his show last night, Carlson got around to addressing on the air Neff’s resignation after his shockingly racist online persona was outed by CNN on Friday.

Carlson expressed no remorse, not even an explanation of what Neff had said. Carlson didn’t even express surprise. After all, if you suddenly learned your top writer was an abhorrent racist, wouldn’t you express shock and outrage… unless you knew and at least tolerated it?

Instead, Carlson painted Neff’s behavior as college prankishness that deserved forbearance, not termination.

CARLSON: Over the weekend, you may have seen stories about a writer on this show called Blake Neff. For years since he was in college, Blake posted anonymously on an internet message board for law school students.

On Friday, many of those posts became public. Blake was horrified by the story and he was ashamed. Friday afternoon, he resigned from his job.

We want to say a couple of things about this. First, what Blake wrote anonymously was wrong. We don't endorse those words. They have no connection to the show.

It is wrong to attack people for qualities they cannot control. In this country, we judge people for what they do, not for how they were born.

We often say that because we mean it. We’ll continue to defend that principle, often alone among national news programs, because it is essential. Nothing is more important.

Blake fell short of that standard and he has paid a very heavy price for it. But we should also point out to the ghouls now beating their chests in triumph for the destruction of a young man, that self-righteousness also has its costs. We are all human.

When we pretend we are holy, we are lying. When we pose as blameless in order to hurt other people, we are committing the greatest sin of all and we will be punished for it. There's no question.

Carlson’s claim that his show had “no connection” to what Neff wrote had already been disproved by CNN. For example:

In some cases, language Neff used on the forum ended up on the show. The night of June 15, in commenting on a football coach who was the subject of controversy over a sweatshirt he'd worn, Neff wrote on the forum, "[I]t is your f***ing right as an American to wear whatever T-shirt you want, and hold whatever political views you want. Christ." The next night on his show, Carlson said, "And they can wear whatever shirts they want. You thought that was true. You thought that was your right as an American."

Carlson’s claim to “judge people for what they do, not for how they were born” is pretty laughable, too. When was the last time you saw Carlson make a point of excluding legal immigrants or Dreamers from his white nationalist rants?

The delay in commenting on the matter also speaks volumes. CNN's Oliver Darcy, who wrote the bombshell report on Neff, questioned why Carlson didn't address the firing Friday, given that Neff had resigned by Friday morning and there was plenty of time to prepare remarks in time for Carlson's 8 PM show. If you were a cable news host who had just learned your top writer had been secretly posting racist material online, Darcy asked, “Wouldn’t you want to address it and clear the air” immediately?

I think we all know why the delay, why the lack of outrage or regret: Because regardless of how Neff expressed his views to his Fox colleagues, Carlson obviously knew and approved.

You can watch Carlson’s “sorry not sorry” below, from the July 13, 2020 Tucker Carlson Tonight.