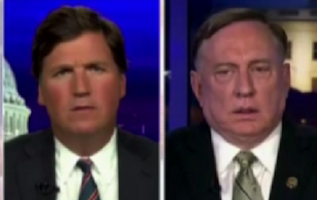 As Donald Trump kicked off his 2020 campaign last night, Tucker Carlson sent the fan-in-chief a message: a war with Iran will kill your re-election chances.

Of course, shoring up Trump’s re-election chances is hardly my idea of a good reason to do anything. But in this case, I’ll take what I can get from Fox News.

Carlson got right to the point during this brief segment. Noting that the U.S. “seems to be slipping toward a war” in the Middle East at the same time the acting secretary of defense has just resigned, Carlson asked guest Doug Macgregor, a retired Army colonel, whether we are moving closer to a military conflict with Iran.

MACGREGOR: Let’s hope not because if the president looks out on the sea of faces he has in front of him tonight, all of these supporters, he needs to be reminded of two things. First, what Buck [Sexton, a previous guest] has already covered about securing the border and secondly, about his promise to end these pointless, endless wars in the Middle East.

We know Trump was otherwise engaged when this aired. Let’s hope he catches it later on DVR.

Watch Carlson act like a voice of reason below, from the June 18, 2019 Tucker Carlson Tonight.

truman commented 2019-06-20 13:37:29 -0400 · Flag
Today’s Iranian downing of a US drone over Iran gives warmongers Bolton and Pom Pom Pompeo the pretext they wanted to start another Mideast War.

Lawrence Geller commented 2019-06-19 13:59:14 -0400 · Flag
A war with Iran would be much more than a disaster for Trump’s presidential campaign. It would mean a huge number of casualties, and possibly the beginning of a nuclear war. I know that Trump has no concern with how many innocent people would die. Hopefully, concern with him losing the next election will be enough to spare the planet a nuclear holocaust.

Kevin Koster commented 2019-06-19 12:30:08 -0400 · Flag
I think Truman may sadly be correct. Most really hardcore Right Wingers are salivating over the chance of provoking an armed conflict with Iran.

It’s a win-win-win for them. They get to bomb the heck out of a country they’ve hated since 1979, and they get to play the “We’ve got to re-elect Pence! We’re at WAR!!!” card. And they think this big shiny object will distract everyone from the continuing criminal morass of the Pence White House.

I truly hope that enough higher-ups in our military are able to put the brakes on the John Bolton-Mike Pompeo-Tom Cotton freight train.

truman commented 2019-06-19 12:23:45 -0400 · Flag
Waiting for Orange Donald’s “Gulf of Tonkin” moment. A mysterious explosion at a Saudi oil facility. Talking Toilet Brush Bolton and Pom Pom Pompeo will misuse some bogus intelligence to place the blame on Iran.
Off to war we go once again.