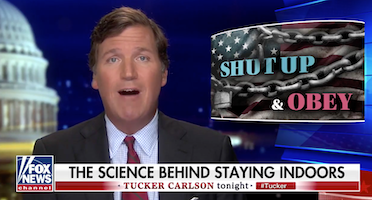 Tucker Carlson dangerously and deceitfully claimed that “actual science” indicates that staying inside doesn’t save lives “but politicians don’t care.” Actually, Carlson seems to be the one who doesn't care about lives lost.

In his commentary last night, Carlson again proved that the Fox viewers’ lives saved by his early warnings about the seriousness of the coronavirus was a by-product of his white nationalist politics, not a genuine concern for public welfare. Otherwise, Carlson would not have perverted science and truth to suggest his viewers disregard stay-at-home orders and risk contamination.

What’s even more disturbing about Carlson’s commentary is that it was approved by Fox and promoted online. It’s yet another example of the Fox News culture of death.

Carlson began with outrage over this news about a man in Colorado handcuffed and detained by police for playing tee-ball in a park with his wife and daughter. Apparently, the police misunderstood the park rules, the man refused to present identification when asked to do so and the police have since apologized.

No doubt, it was an unfortunate incident and I am not making light of it. But not even Carlson gave an indication it was in any way typical. Instead, he just suggested as much. And I can’t help but notice that I don’t recall Carlson showing much if any concern for African Americans wrongly detained by police. At the end of February, Carlson defended “stop and frisk” policies as life savers, even as he admitted that 88% of the searches never discovered a crime.

But here, Carlson twisted science and the facts to demonize stay-at-home orders which have already been shown to save lives.

The police apologized to the Colorado man weeks ago. But Carlson left that fact out of his screed. instead, he suggested the state doubled down on indiscriminate authoritarianism.

The next day, Jared Polis, who is the governor of Colorado, did not apologize. Instead, he issued an executive order extending his lockdown until the end of April. Polis included no scientific justification for that decision. Instead, he summed up his reasoning with a line fit for a tank top: "Simply put, by staying home, Coloradans are saving lives."

As it happened, there's quite a bit of research on that question. It turns out -- and you may have guessed this already because it's very obvious -- that enclosed spaces are a dangerous place to be in a pandemic. That was the conclusion of a study earlier this month in The Journal of the American Medical Association.

Sure, if you’re enclosed with someone who’s infected! That’s why offices, restaurants and movie theaters have closed and public parks, such as the one in the Colorado story, have not.

I could not find the article Carlson was referring to but I found this, from an April 17 article in JAMA:

So, the question is why are our leaders hurting us on purpose?

And the answer is: because they can.

Controlling the population makes them feel powerful. Our fear makes us easier to control. The average politician has no incentive to follow the science and thus let the public outside. You may be suffering intensely, but they're enjoying it.

So, why aren’t you back in the studio with your guests, Tucker? Spend a day on the packed beach in Florida with your crew and prove to us how wrong "the leaders" are!

While we’re not holding our breath, you can watch Carlson’s dangerous, potentially life-threatening propaganda below, from the April 20, 2020 Tucker Carlson Tonight.

Ellen commented 2020-04-23 23:52:29 -0400 · Flag
Actually, I believe I did find the article you say was referenced in the video but I did not find Carlson’s quote. I looked through several articles by Lydia Bourouiba as a matter of fact. I thought that perhaps a fuller article was behind a paywall.

Regardless, I did not see in any of the three articles a suggestion that staying at home is more dangerous than going out and about, which is what Carlson was suggesting. They were talking about being in an enclosed location with a coronavirus patient, as I guessed was the case in my post.

James Aston commented 2020-04-23 18:28:19 -0400 · Flag
Could not find? It’s referenced in the video you referred to. The quote from one of the authors of the JAMA report is quoted in an interview with USA Today as it is disclosed in the video referred. https://www.usatoday.com/in-depth/news/2020/04/03/coronavirus-protection-how-masks-might-stop-spread-through-coughs/5086553002/ https://jamanetwork.com/journals/jama/fullarticle/2762692