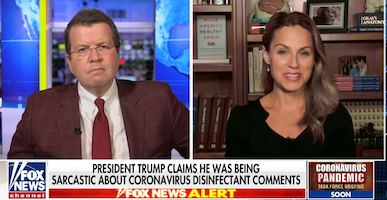 It speaks volumes about Fox that a member of its so-called “Medical A-Team” was less critical of Donald Trump’s suggestion that injecting disinfectant could cure COVID-19 than host Neil Cavuto.

You may recall that Saphier is the radiologist trotted out at Trump’s coronavirus town hall where she swooned, “I do believe as a nation that we are beholden to you for your decisive swift action in the beginning with the travel ban.” She has also long put Trumpism over public health. She has complained that Obamacare has harmed our medical system because too many Americans gained access to health insurance and medical treatments. More recently, she shrugged off coronavirus’ rising death toll by saying some patients will eventually “have to come off the ventilators and they’re either going to survive and they’re either going to die … but that’s also gonna mean that there are gonna be ventilators freeing up.”

Trump’s suggestion about injecting disinfectant to cure coronavirus was a bridge too far even for Saphier. But not his obvious lie that he was being sarcastic.

On his Fox Business show, Cavuto blasted Trump’s “unsettling” claim of sarcasm along with his “dangerous” touting of hydroxychloroquine and for having “alarmed the medical community” with his disinfectant suggestion.

A little later, on his Fox News show Your World, guest Saphier was anything but alarmed.

In fact, Saphier suggested that Trump’s dangerous words were just part of his winning charm. “He says he was [being sarcastic],” she said, as if there was no way to tell that he obviously wasn’t. “We know that he speaks off the cuff. I think part of the reason he won the 2016 election is because he does speak extemporaneously.”

But then she said, “When you have people that are hunkered down at home, they’re very afraid of this virus right now, that is possibly not the time to speak off the cuff especially when you’re thinking of things you can do at home to protect you from this viral illness.” Possibly not the time? How about there’s never a time to “speak off the cuff” about injecting poison into your veins?

Saphier went on to sugarcoat the inexcusable further: “It’s not going to wash your insides like it washes your clothes. I agree with what Dr. Birx said that he gets the information and then he chews on it and he just likes to again speak off the cuff, but the truth is I think we have to be very clear in what we’re saying to the general public because people are afraid, and they really just need some concise information as to what they can do to stay safe, which I do think that they also are doing a good job or providing that information."

Saphier, speaking from a remote location, had her book strategically placed in prominent position on a shelf behind her.

Cavuto was far more critical. “But you know his words do carry weight. He’s the president of the United States, so people obviously listen to him, pay more attention than they might others who go up to that microphone, and it occurs the same week we learned that maybe hydroxychloroquine isn’t the magic medical bullet that some, maybe even the president had hoped,” he began.

“The FDA saying [hydroxychloroquine] is dangerous stuff outside of a clinic or clinical studies or hospital, and this only days after these findings out of a VA hospital that a number of people died who were vulnerable to some of the side effects or had some of the underlying conditions that could make taking this a little risky,” Cavuto continued. “Do you think that the president just has to be more careful or leave the medical advice to his experts?

Yes, Saphier had to admit Trump should be more careful. “I do think right now because we’re in a such a heightened state of awareness and you know we don’t have a proven treatment for this illness, we don’t have a vaccine yet, I think it’s really important to be very clear and concise and straightforward with our information to the public.” She said some information “may not actually translate to information that the public needs to know right now” and “it’s important that we don’t give fake news.”

You can watch Trump fangirl Saphier make light of Trump’s ludicrously dangerous comments below, from the April 24, 2020 Your World.

Eyes On Fox commented 2020-04-27 09:40:29 -0400 · Flag
Someone needs to tell Doktur Saphier a dermatological certainty. If she keeps this up her nose skin tone will stain permanently dark brown. The smell lingers for years too.

Also, the folks at Fox News who were so obsessive-compulsive in the Obama era. Who raged apoplectic if Obama led with his left foot instead of his right foot as he stepped out of the White House look like they’re about to overdose on Prozac in the era of mental head case Trump and all of his chaotic craziness.

I get partisan bias and loyalty. But as I tell everyone Trump is orders of magnitude worse than any American politician who proceeded him. It takes incredible effort to normalize Trump. Like leaping onto a hand grenade.