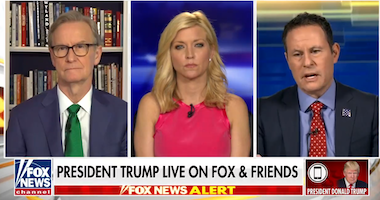 In one Fox & Friends comment yesterday, Donald Trump revealed he thinks Fox News is an extension of himself. Not one of the three lapdog hosts objected.

TRUMP: They will do anything they can to hurt this presidency, and yet here we are with the best numbers we've ever had. I don't even understand it when you can get such fake news from so many – "The New York Times" is a totally dishonest paper. They're dishonest people. "The Washington Post," same thing. I'm trying to figure out for three and a half years who is more dishonest?

Then, because Trump had nothing more important on his mind, apparently, he continued daydreaming about how to undermine American media:

TRUMP: Who is more corrupt? "The Washington Post" or "The New York Times"? When I figure it out, I'll let you know. We'll have a special.

And how did the three lapdogs react? Cohost Ainsley Earhardt, the Super Duper Christian who never seems to mind Trump’s malice and ill will, changed the subject as if he had said nothing noteworthy:

EARHARDT: Mr. President, you said we're going to give it 15 days. That's today. Then you said Easter and then you said yesterday that was aspirational. Now you're saying the end of this month. If the -- if the physicians, if the experts, if your task force says at the end of the month, hey, we need to continue to do this, we need to continue to take a pause into the next month, what will your response be?

If ever you needed proof that Trump thinks he’s the head of Fox or that his TV image means more than anything, including Americans suffering and dying from the coronavirus, here it is.

Rw Fan commented 2020-04-01 12:50:53 -0400 · Flag
Eventually their spin will not work. Yes, the crazy base will still believe but that base is going to shrink significantly. It’s the millions of people who switched from Obama to Trump he’s going to lose and has already lost. The con has been completely exposed. Nobody but the insane is buying it anymore.

Bemused commented 2020-04-01 04:31:01 -0400 · Flag
Naaaaah. It’s Fox(not)News that drives this narrative. They’re only making Donald feel that he’s in charge: flattery works with him and they’re laying it on as thick as they can. Totally embarrassing to anybody not prone to mindless adulation for the Dear Leader.