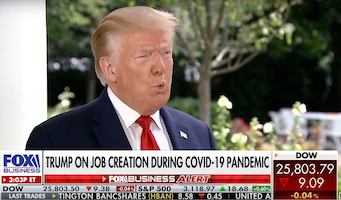 Donald Trump still hopes he doesn’t need to do much to counteract the coronavirus pandemic because despite all indications to the contrary, he thinks it will “just disappear.”

During his interview with Fox Business’ Blake Burman today, Trump couldn’t have sounded less concerned about the surging number of COVID-19 cases:

TRUMP: We’re headed back in a very strong fashion with a V and I think we’re going to be very good with the coronavirus. I think that at some point that’s going to sort of just disappear. I hope.

The Washington Post’s Philip Bump calculated that Trump has made this “prediction” at least 19 times:

Trump often adds some conditions under which it will go away, like claiming repeatedly in February that it would go away when the weather got warmer. The weather is currently warmer than it was then, particularly in states like Arizona and Texas.

So not only have Americans heard this before, but they’ve also seen the pandemic continue to expand despite Trump’s comments. In fact, the two-week periods after Trump has claimed that the virus will go away have been more likely to see increases in the number of confirmed cases than decreases.

Of the 17 times Trump has claimed the virus will go away for which there is available data from two weeks later, the daily average number of cases has increased 11 times — 65 percent of the time. Looking at every day since Feb. 10, when Trump first said that the virus would go away, the two-week change in the daily average has increased 58 percent of the time, meaning that Trump’s comments are more likely to precede increases in new cases than another random day.

Not surprisingly, Burman said nothing to challenge this Trump fantasy. “You still believe so,” Burman replied, thus suggesting he didn’t buy it but also making it clear he’s an acolyte.

Watch it below from Burman's July 1, 2020 interview. I’ll have a post about the following section of the interview in the morning.