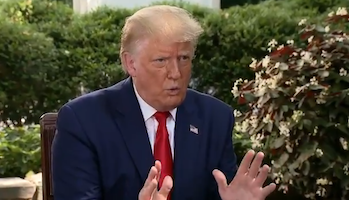 Donald Trump hinted he’ll show the same concern for the crime surge in American cities as he has for the coronavirus surge, which is to say none.

In a preview of tomorrow’s Fox News Sunday interview, the show tweeted out a clip of Wallace all but inviting Trump to attack Democratic mayors. Yet Trump couldn't manage to hit the softball:

WALLACE: You’ve seen deaths up in New York, deaths up in Chicago, shootings. How do you explain it, and what are you going to do about it?

WALLACE: Liberal Democrats have been running cities in this country for decades.

WALLACE: Why is it so bad right now?

TRUMP: They’ve run ‘em poorly. It was always bad, but now it’s gotten totally out of control, and it’s really because they want to defund the police, and Biden wants to defund the poice.

WALLACE: Sir, he does not.

TRUMP: Look, he signed a charter with Bernie Sanders.

WALLACE: He says nothing about defunding the police.

TRUMP: Oh, really? It says “abolish,” it says “defund.” Let’s go. [Turning to someone off camera] Will you get me the charter, please?

The video ends at that tease. But Wallace is correct. Biden does not support defunding the police, much less abolishing them. From PolitiFact:

Meanwhile, Trump has been in office for 3.5 years. What has he done or proposed?

Let’s hope Wallace asks. Before then, you can watch this preview of the interview below.

NEW: Chris and President Trump sit down to discuss the recent spike in violence in major cities across the country. Tune in Sunday to catch the full interview. #FoxNewsSunday pic.twitter.com/r7hwgyVhKM

Hey, Hannity, next time you see Trump ask him to sit like Wallace does here, with his back to the chair and legs crossed? He can’t. He’d topple over.