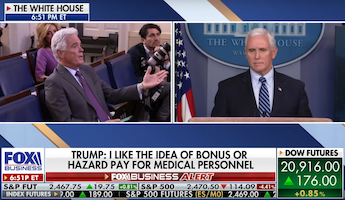 After refusing to reopen the Obamacare exchanges and help uninsured Americans during the COVID-19 pandemic, Donald Trump ran away from a Fox reporter’s questions about getting Americans help, made Mike Pence respond instead, then praised him as a “great professional” for being “able to speak for five minutes and not even touch” the question.

Fox's chief White House correspondent John Roberts did an excellent job trying to hold the Trump administration accountable for its decision not to reopen the Obamacare healthcare.gov exchanges. (Note: some may be able to get insurance anyway)

ROBERTS: There are a lot of people who are worried about getting sick, and do they end up in a hospital? People who are uninsured and will they be crushed by medical bills. You were considering last month, it’s last month already, in March, reopening the healthcare.gov exchanges. There has been a determination not to do that. Could you tell us what the rationale was behind that decision, and what would you have as an alternative?

Craven Trump didn’t have the decency to answer the question. Instead, he made Pence do the dirty work for him. Pence clearly knew the administration has no alternative so he yammered about how great Trump is and touted the irrelevant fact that two insurance companies will waive copays for testing and treatment.

TRUMP: Okay. They took that up under the task force and maybe Mike, do you want to say a few words about it.

PENCE: Well, thank you, Mr. President. And what I can tell you is that the president has made a priority from the outset of our task force work, make sure every American knows that they can have a coronavirus, and they don’t have to worry about the cost. We were very inspired as well. Because of the president’s engagement with the leading health insurance companies in the country that now, so far, two of the top health insurance companies in America have announced that they’re not only willing to waive copays on testing, now testing is fully covered because of the bill the president signed for every American. But also that these two insurance companies have waived copays on all coronavirus treatment.

In other words, those not insured by either company are out of luck until the administration gets around to deciding what, if anything, it wants to do for uninsured Americans - because hey, while the first coronavirus case showed up in the U.S. on January 20, Trump & Co. is still figuring out the testing and getting supplies for healthcare professionals! Meanwhile, Americans may go bankrupt if they get coronavirus or worse, be afraid to get treatment at all.

PENCE: And I can assure you that as Congress and the president and the administration begin to discuss the next piece of legislation, we’re going to make sure that Americans have those costs compensated and covered. Our priority right now is ensuring that every American takes the 30 days to slow the spread to heart. The best thing we can do for one another, for our family’s health, for the most vulnerable among us, is practice those mitigation strategies that the president outline yesterday for the next 30 days.

We’re dealing with testing to make sure that every American can have a test that needs one. We’re dealing with supplies, and we’re making great progress in building personal protective equipment and ensuring that ventilators are available, particularly for the communities most impacted. But the American people can be confident that, as we move into this, we’re going to make sure that our health care workers are properly compensated for their extraordinary and courageous work. And we’ll make sure that the financial burden on those who end up contracting the coronavirus and dealing with its most serious symptoms also can deal with those issues and deal with those costs.

ROBERTS: Understood. Mr. Vice President, but there will be people who don’t have insurance who get sick before any of these mitigation efforts are put into place. And without opening the healthcare exchanges, where can they find insurance? People who aren’t insured by these companies that are covering the cost of the copay, where can people go now to get health insurance if they get, before they get sick? Before they get sick?

PENCE: Well, all across America we have Medicaid for underprivileged Americans, and at the president’s direction, the Center for Medicaid and Medicare services has given unprecedented waivers for states to expand coverage for coronavirus testing and treatment. We’ve also extended waivers for Medicare administration to make sure that people have access to that coverage. But we’re going to continue to bring opportunities to the traditional systems of Medicaid in particular for the uninsured in America.

ROBERTS: Can you expand that to cover middle-class?

PENCE: Well, I think what we’re seeing health insurance companies do today, John, is really inspiring. I mean, one of the things that has characterized the president’s approach here -

ROBERTS: That’s for people who already have insurance.

I was at a distribution center for Walmart today in Southern Virginia, and I saw the way this company that, literally, has already hired thousands of people… These workers are coming to work. The truck drivers are coming to work, farmers are working in the field. Grocery stores made a commitment to the president a month ago that no grocery store in America would close down. The food supply is strong. We’re getting food on the table of every American, but it’s because the president went to these leaders and said, “We need you to step up and do your part.”

We engaged health insurance executives early on in this process to waive copays on Coronavirus testing, and because of the engagement, and, frankly, because of that patriotic and compassionate spirit that’s being reflected, we’ve already seen two of the largest insurance companies in the country announce that they’re providing full coverage, free of charge for coronavirus treatment.

I fully expect, I think as the president does too, that we’ll see more of that for people that have insurance. We’ll continue to provide flexibility for Medicaid, for people that don’t have insurance. And we’ll make sure that Medicare has a flexibility to meet this moment. For seniors, when we remember that seniors with underlying health conditions are the most vulnerable to serious outcomes from the coronavirus, but we’ll get through this using the full weight of the federal government and the full strength of the American economy.

Apparently, that was too much time out of the spotlight for Trump. You can see him impatiently waiting to get back in. But not to provide any solutions for uninsured Americans. No, he specifically praised Pence for not doing so.

TRUMP: John, I think it’s a very fair question, though, and it’s something we’re really going to look at because it doesn’t seem fair. If you have it, you have a big advantage and at a certain income level you do. I think it’s one of the greatest answers I’ve ever heard because Mike was able to speak for five minutes and not even touch your question. I said that’s what you call a great professional. Let me just tell you, it’s really a fair question, and it’s something we’re looking at.

Kudos to Roberts for not letting him off the hook.

ROBERTS: I mean, just in terms of a fair question or not, I always endeavor to ask fair questions, but this is a huge worry for people in this country who were in that donut hole. They don’t have commercial insurance. They don’t qualify for Medicaid. What do they do?

TRUMP: It’s a certain group. And it’s a pretty big group. We’re looking at it.

ROBERTS: We spent the entire 2000 election talking about the donut hole, and it’s still there.

TRUMP: I haven’t been up there yet. The other people have been talking about it, and they haven’t spoken to-

ROBERTS: This was 20 years ago when we’re talking about … the donut hole.

Notice how Trump uttered not one word of concern or urgency about suffering Americans beyond his vague “we’re looking at it?" Not even a “We’re looking at it because this is a big problem that must be addressed." In fact, you can almost hear his petulance when a female reporter followed up by asking if Trump is committing there will be "something you're going to do for the uninsured."

TRUMP: No, I'm not committing but it’s something we’re going to look at. I can’t commit. I have to get approval from it. I have a thing called Congress.

You can see this latest example of the Trump administration’s pro-death agenda below, from the April 1, 2020 Coronavirus Task Force briefing.

Refusing to facilitate medical coverage for the poor ain’t exactly what Jesus meant when he enjoined his followers to love their neighbour and do onto others, etc etc.