Trump On COVID-19 Surge: ‘If We Tested Half As Much, Those Numbers Would Be Down’ 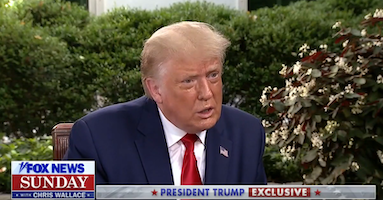 The only thing worse than Donald Trump’s ignorance and lies about the coronavirus pandemic surging in the U.S. is the fact that he clearly has no concern about the thousands of Americans who are getting sick and dying every day.

Wallace began the interview by bringing up the surge of coronavirus cases. “You still talk about it as, quote, ‘burning embers,’” Wallace said. Then he put up a chart showing that the number of cases has more than doubled since the supposed peak in April. “One day this week, 75,000 new cases,” Wallace noted.

Trump expressed no sorrow for the losses, no sympathy for the victims or their families, and no indication he cared about the pandemic at all except as to how it reflects on him and his image:

TRUMP: Chris, that's because we have great testing, because we have the best testing in the world. If we didn't test, you wouldn't be able to show that chart. If we tested half as much, those numbers would be down.

WALLACE: But -- but this isn't burning embers, sir? This is a forest fire.

TRUMP: Yeah. I think what we'll do -- well, we have them under travel ban, too, Chris. I closed them off. If you remember, I was the one that did the European Union very early.

But when you talk about mortality risks, I think it's the opposite. I think we have one of the lowest mortality rates in the world.

Trump obviously doesn’t know the U.S. mortality rate, nor does he know that it’s not the lowest in the world. He just wants to spin a literal life and death issue for his own glory.

Wallace did an excellent job here and throughout the interview.

TRUMP: I heard we have one of the lowest, maybe the lowest mortality rate anywhere in the world.

At that point, he called on Press Secretary Kayleigh McEnany for the mortality rates.

TRUMP: Number one low mortality fatality rates. I hope you show the scenario because it shows what fake news is all about - -

TRUMP: You said we had the worst mortality rate in the world --

Things got a bit heated then and the interview cut to a voice-over.

WALLACE (voice-over): All right, it's a little complicated, but bear with us. We want with numbers from Johns Hopkins University, which charted the mortality rate for 20 countries hit by the virus. The U.S. ranked seventh, better than the United Kingdom, but worse than Brazil and Russia.

Later, Trump returned to his claim that testing is to blame for the surge in cases. Wallace called him out again:

TRUMP: We go out into parking lots and everything, everybody gets a test. We find -- if we did half the testing -- with all of that being said, I'm glad we did it. This is the right way to do it. I'm glad we did what we're doing, but we have more tests by far than any country in the world.

WALLACE: But, sir, testing is up 37 percent.

WALLACE: I understand. Cases are up 194 percent. It isn't just that testing has gone up, it's that the virus has spread. The positivity rate has increased. …

Trump shrugged that off as no biggie, too.

We go out and we look and then on the news -- look if you go back to the news, all of your -- even your wonderful competitors, you'll see cases are up.

TRUMP: No country has ever done what we've done in terms of testing. We are the envy of the world. They call and they say the most incredible job anybody's done is our job on testing, because we're going to very shortly be up to 50 million tests.

WALLACE: Is it possible [other countries] don't have the virus as badly as we do?

We find cases and many of those cases heal automatically. We're finding -- in a way, we're creating trouble. Certainly, we are creating trouble for the fake news to come along and say, "Oh, we have more cases."

In fact, U.S. testing is abysmal, which Wallace did not get into.

You can see Trump’s indifference to suffering Americans below, from the July 19, 2020 Fox News Sunday.