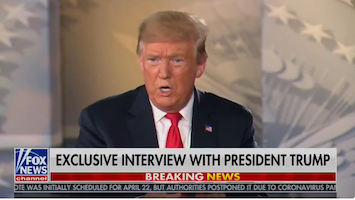 In his lapdog interview with Sean Hannity last night, Donald Trump stopped himself from comparing the American city of Chicago to Afghanistan -- because he considered that an insult to Afghanistan. “Great American” Hannity was fine with this brand of “patriotism.”

At about 6:08 into the interview, Hannity tried to play up Trump as a law and order candidate unlike (panders-to-The-Blacks) Joe Biden.

HANNITY: If we are to become a more perfect union and if we really want to pursue happiness, we first have to have law and order. … Okay, these big cities, we’ve watched Chicago violence now for how long? All through the Obama, Joe Biden administration.

They barely mentioned it in eight years. You see Seattle, you see New York City. We see now people dying in the autonomous zone. I don’t know how people can pursue their happiness and dreams in life, if they don’t have basic fundamental security.

Trump, of course, had no thoughts on anything but himself. As such, he revealed he’s more partial to foreign countries that are “working with us” than American cities that are problematic. So much for “America first.”

TRUMP: Look, Chicago’s an example. It’s like worse than Afghanistan. It’s worse than -- I shouldn’t say because they’re working with us. Honduras, Guatemala, they’re all working with us now. You know, we have our lowest numbers. We have phenomenal numbers on the border. Border patrol has done a great job. We built 220 miles of wall. It’s going up very rapidly. We should be doing about 10 miles a week now. And we’re going to have … it will be completed very soon. But what we’ve done there is incredible. But you look at Honduras, Guatemala, all of these different places. We have cities that are worse. In some cases, far worse. Take a look at Detroit, take a look at what’s happening in Oakland. Take a look at what’s happening in Baltimore. And everyone gets upset when I say it, they say, “Oh, is that a racist statement?” It’s not a racist.

Frankly, Black people come up to me, say, “Thank you, thank you sir, for saying it.” They want help, these cities, it’s like living in hell. But last week and I think two weeks before that, they shot 14 and 18 people killed and 68 people in Chicago.

As I’ve said before, nobody hates America more than Donald Trump and Fox News.

You can watch this bit of America-hating below, from the June 25, 2020 Hannity.

truman commented 2020-06-28 09:45:37 -0400 · Flag
“What should I do today?” mused the Orange Clown. “Tell my BFF Vlad to stop putting bounties on the lives of US soldiers in Afghanistan? Or protect Confederate War Monuments from protesters? Afghanistan can wait.”

Marge Arnold commented 2020-06-27 10:58:15 -0400 · Flag
Anna, I imagine they feel there’s nothing to be ashamed of when they look in the mirror and see their lives and souls has been vindicated by the election of Trump.