Trump Is Suddenly Pro-Facemasks: I ‘Looked Like The Lone Ranger’ 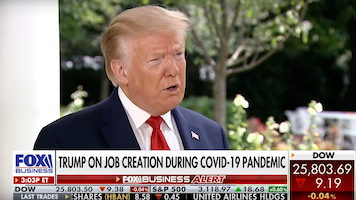 Donald Trump pretended on Fox Business that he has always liked facemasks, especially because he thinks he looks good in one, and Fox Business interviewer Blake Burman let him get away with rewriting history.

In case you’ve forgotten, the Liar-in-Chief recently held two rallies where most attendees didn't wear masks and he didn’t give a fig. In May, it was reported that Trump thought wearing a mask would "send the wrong message" and make him look ridiculous.

But now, with his poll numbers tanking and the number of coronavirus cases soaring, Fox News has suddenly urged him to wear a mask. On Tuesday, Fox & Friends very noticeably sent that message over the TeeVee. Yesterday, in his interview with Trump, Burman did so directly.

BURMAN: Speaking of COVID-19, Goldman Sachs put out a model yesterday saying that if there is universal masks, it would be a net positive for GDP. We know the IHME model says that if there were universal masks that it would be beneficial, that it would save lives. So if there is an economic benefit, sir, and there is a public health benefit, sir, why not go forward and say there should be mandatory masks all across this country?

Trump indicated no concern about saving lives and made the mask issue all about himself:

TRUMP: Well, I don’t know if you need mandatory because you have many places in the country where people stay very long distance. You talk about social distancing but I’m all for masks. I think masks - I would wear  - if I were in a group of people and I was close –

BURMAN: You would wear one.

TRUMP: Oh, I would, I would. Oh, I have, I mean people have seen me wearing one. If I’m in a group of people where we’re not, you know, ten feet away and - but usually, I’m not in that position and everyone’s tested. Because I’m the president, they get tested before they see me but if I were in a tight situation with people, I would absolutely.

BURMAN: You think the public will see that at some point?

TRUMP: I mean I’d have no problem. Actually, I had a mask on. I sort of liked the way I looked OK. I thought it was OK. It was a dark black mask and I thought it looked OK, looked like The Lone Ranger. But no, I have no problem with it. I think and if people feel good about it, they should do it.

Memo to Trump: The Lone Ranger's mask was over his eyes, not his mouth.

You can watch Trump show more concern for his looks than for the thousands of sick and dying Americans below, from his July 1, 2020 interview on Fox Business Network.

Bemused commented 2020-07-03 04:31:00 -0400 · Flag
I look forward to all the reruns of Trump saying he wouldn’t/won’t wear a mask. T’won’t make much difference to the faithful, however. I mean, REALLY, what would had happened had Obama said or done a fraction of what Trump has said and done? The Dems would have been among the first to cry stupid.

As I recall, the Obama administration dealt with two serious health crises and lost about 10,000 Americans to H1N1 and 2 (two) to Ebola. The Covid-19 dealth toll has reached 150,000 and some pundits are talking about it hitting a million or more by the end of the year if the current upward trend isn’t somehow stopped. Wishful thinking won’t cut it, this time. Lone Ranger, indeed. Nope. Noway, nowhow.

Anonymous commented 2020-07-02 20:07:20 -0400 · Flag
The March 9 cover of The New Yorker magazine prefigured this moment, depicting the President with a surgical mask fitted over his eyes and forehead instead of covering his nose and mouth. The New Yorker cover cartoon made visible Trump’s early blindness to what he called the “invisible enemy”. If one only changed the New Yorker mask’s color to black and added eye holes, it would somewhat resemble the Lone Ranger’s mask.

I wonder if Pence will now start speaking less of “facial coverings” and more of “masks”. It doesn’t seem to have been Pence or any government Republican pushing Trump to sorta move towards masking up. Had to be Hannity/Fox….what entity has more influence over Trump and Republicans than Fox News?

Not wearing a mask merges a libertarian, anti-nanny-state, devil-may-care maverick image with that of an oligarch, who covid tests his entourage every day. Deeper than that Trump intuits that wearing a mask will diminish his Base weapon, namely, his reality-TV charisma.

Anonymous commented 2020-07-02 12:02:14 -0400 · Flag
Might not many of Trump’s supporters assimilate Trump’s rubbery reversal on masks in the same way they dealt with his one-time admission that Obama was born in the U.S.? My guess would be they rationalize (or should I say, irrationalize) it as Trump’s playing the press, disarming the press with BS, or cleverly covering up his tracks after the dog whistle damage has been done. Trump at one point chided a member of the press for wearing a mask. Let’s now see if he chides anyone for not wearing one.

Thx4 Fish commented 2020-07-02 10:54:17 -0400 · Flag
I would not call his position ‘pro-mask’ more like ‘mask indifferent.’ But it is a start. Unfortunately at this point, in order to change the minds of his mindless and maskless followers, Trump would have to give an entire speech promoting the wearing of masks. I don’t see that happening and its VERY, VERY SAD!