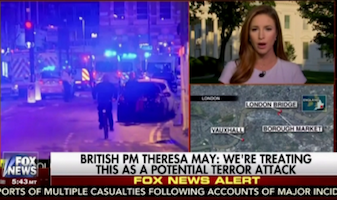 English Prime Minister Theresa May called a “terrible incident” on London Bridge today a “potential act of terrorism.”  But even though the perpetrator or perpetrators remain unknown, along with any country of origin, Fox News interrupted its London-based coverage to display a tweet from Donald Trump suggesting the incident validated his Muslim ban. Nobody noted that Trump’s Muslim ban may well have been irrelevant for this incident.

The New York Times has a summary of the situation as of now:

The authorities closed London Bridge after a white van mounted the sidewalk and mowed down pedestrians a little after 10 p.m., according to multiple witnesses on the bridge.

The police said there were casualties there, with more than one person dead, and witnesses reported seeing one bearded man with a large knife.

Soon after, there were reports of knife attacks at nearby Borough Market, a popular spot for pubs and restaurants on the southern side of the Thames. The police said that “armed officers responded and shots were fired.”

Fox News went to Sky News for coverage in London. Fox anchor Julie Banderas happened to break into the coverage just as the London-based correspondents were discussing how their security services have successfully prevented guns from coming into the country.

After Banderas reported on what was known about the situation, Fox reporter Kristin Fisher came on to tell us that Trump has been briefed on the situation in London and that he has been “very active about what’s happening in London on Twitter." She chirped, "He’s posted two tweets since this incident took place." If you ask me, two tweets does not constitute "very active on Twitter."

And actually, Trump had tweeted three times, though one was a retweet from Drudge. That still doesn't seem worthy of the description "very active."

Fears of new terror attack after van 'mows down 20 people' on London Bridge...

We need to be smart, vigilant and tough. We need the courts to give us back our rights. We need the Travel Ban as an extra level of safety!

Whatever the United States can do to help out in London and the U. K., we will be there - WE ARE WITH YOU. GOD BLESS!

Fisher read the two tweets from Trump without mentioning that he had retweeted Drudge. But she did note that Trump was “using what just happened in London to push for his travel ban which has been stuck in the courts for weeks, if not months now.”

“And then remember, just two days ago, several Trump administration officials actually asked the Supreme Court to save it, to revive it,” Fisher continued. “President Trump really pushing that on Twitter right now and hoping that perhaps this incident will be able to sway some minds.”

Fisher did not remind viewers that it’s not known who carried out this attack or where he, she or they are from. But it’s quite likely that whoever it was, the Muslim ban would not have prevented the person(s) from entering the U.S.

As Media Matters explained after Fox tried to use the recent terror attack in Manchester, England to promote Trump’s Muslim ban, Trump’s order only bans entry to the U.S. by people from six majority-Muslim countries: Iran, Libya, Somalia, Sudan, Syria and Yemen. The ban would not have barred the Manchester bomber because he was a Manchester native.

At this point, there is nothing to indicate that the London incident was caused by anyone from one of the six countries in Trump’s Muslim ban.

But that was not reported by Fisher.

Ari Beers commented 2017-06-05 22:02:40 -0400 · Flag
I wish our country would react as the people in Manchester and London, who after so much tragedy, their people is more united and they don’t blame all the Muslims that live in their country. All the opposite! Shame on us, because we keep saying we are the United States of America, when actually now we are not United at all. I really wish one day this separation ends and everybody realize that we can’t let one ignorant, bully and selfcenter person divide and destroy our country. May God protect us all!

Bemused commented 2017-06-04 04:11:50 -0400 · Flag
@Brenton: it’s not terribly helpful to bang the faith drum. That guy who killed the 9 blacks in a church in (was it) North Carolina) also did it for religion. Regardless of their faith, such people are criminals and should be regarded as such.

Bemused commented 2017-06-04 04:09:44 -0400 · Flag
President Trump’s thinking processes (a word I use advisedly in his case) reveal too many troubling disfunctions to be listed exhaustively. One of these, however, is definitely this propensity for resorting to quantum jumps (aka connecting unrelated things) for propaganda purposes.

The terrorist attacks over the past decade or so were carried out almost entirely by native-born citizens, not recent immigrants. The travel ban would do nothing to stop such people. Connecting the attacks and the travel ban is like connecting apples with elephant dung. Rather, in order to appear even a tad consistent, the President should be tweeting in favour of mass deportation of immigrants from a trouble-making country – say – before WW2, as well as their children and grandchildren. Just get them out of the country and all will be fine and dandy. … Oh dear, wasn’t Donald J. Trump’s grandfather born in Germany?

Another quantum jump that riles me has to do with the 9/11 attack: although 15 of the 19 people responsible were Saudis, the Bush administration war on Iraq. Some people suffered from whiplash but the majority had no real opinion until American men and women started coming back dead or severely wounded. Over 4,000 Americans and several hundreds of thousand others have already died and that war ain’t over yet. As the pressures mount, we should expect President Trump to start yet another war. That’s a GOP thingee: Reagan invaded Grenade, Bush Senior invaded Panama and Bush Junior invaded Iraq. Only the Panama case seemed to be even remotely justified (Noriega was America’s man until he went rogue).

Stan Weiner commented 2017-06-04 02:14:03 -0400 · Flag
First I would like to extend my condolences to the families affected by this senseless act. There you go an example of how to address this situation instead of making political statements that may or may not be true.
I thought the Muslim ban was meant to be for 90-120 days, so that his administration could study and come up with permanent solution. This group of goons has now been in office for over 120 days and has not even come up with post ban solutions. Give them a ban and they will stretch it out to eternity.