Trump Casts Himself As Biggest, Most Important Coronavirus Victim – And Hannity Helps 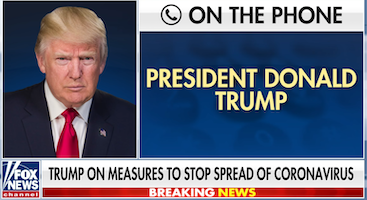 While Donald Trump dangerously downplayed the risk of the coronavirus to Americans, he played himself up as its biggest victim and biggest hero. Sean Hannity was on hand to play lapdog and handmaiden.

In the midst of boasting about the U.S. economy, Trump cast himself as the unsung hero of the coronavirus (COVID-19) epidemic. You’ll notice that his only concern for Americans was a general hope the virus "doesn't happen over here."

TRUMP: We got hit with the coronavirus. And that was out of surprise. I started hearing about it very quietly a couple of months ago from China. And I said, wow, I hope that doesn't happen over here. They got a little bit more, little bit more, little bit bigger. And against the advice of a lot of great professionals, frankly, and they worked for the administration and outside -- I closed the borders to China.

There was more fluffing from Hannity about Trump’s Brave Decision to stop Chinese people from coming and how, as Trump put it, “we have been doing really well,” meaning, of course, himself. And, instead of pressing Dear Leader for details about Pence’s “fantastic job,” Hannity exploited the serious public health situation to bash President Barack Obama and presidential candidate Joe Biden. There was no mention of how Trump has dismantled the pandemic response team Obama built up and sabotaged the U.S. response.

Eventually, at about 17:13, Hannity asked, “What are we prepared as a country to do to keep our citizens safe?”

Trump either could not or would not answer. The only safety he seemed interested in was that of his own political fortunes.

TRUMP: Well, I just say that it's, you know, a very, very small number in this country. And we're going to try and keep it that way as much as possible. I will say, though, the H1N1, that was swine flu, commonly referred to as swine flu. And that went from around April of '09 to April of '10, where there were 60 million cases of swine flu.

And over -- actually, it's over 13,000. I think you might have said 17,000. I had heard it was 13,000, but a lot of -- a lot of deaths. And they didn't do anything about it. Interestingly, with the swine flu, children were -- in particular, they were vulnerable, sort of the opposite in that respect. But children were very vulnerable to the swine flu.

And we acted much differently. And then I watched Biden try and criticize us, but I'm not sure he knows what he's criticizing, to be honest with you. But I watched him the other day try. Or I watch Schumer. Every time they put a mic at his face, he has no idea the incredible job these people are doing. He will say, oh, they're doing a horrible job, horrible job.

Later, after Trump spread his dangerous misinformation about the “corona flu” by telling people to listen to his “hunch” instead of the World Health Organization, and suggesting there was no need to stay home if you're ill, Hannity and his Bedtime BFF painted the Democrats as more dangerous than COVID-19 – while the two pretended to have the entire’ country’s interests at heart:

HANNITY: And even as quickly as you acted, I -- you were attacked for it, xenophobe, you're stigmatizing countries, when I assume that your interest were the best interest of the American people.

What does it say about the state of our politics, we can't even agree to work together on solving a virus that will attack all of us?

TRUMP: Well, Sean, the Democrats weaponize the virus against the Trump administration. They weaponize anything we do. And yet, if they did it, they'd be, you know, hailing it. But they do weaponize this. You know, when -- they know what a great job we're doing. They know we have the best in the world. We have -- and we have really shown it. Even when you look at the small numbers that we're talking about within this country, they're very, very small.

I mean, we have a very large country, to put it mildly, and a great country, by the way. And it's getting greater all the time. But they weaponize the virus against us. And they will just say -- even though they have no facts, they will just say, oh, we don't like the job they're doing. You know, it's just off the cuff.

It's like a natural reflex. And it's not good. Especially, it's not good with something like this. They can say it about certain things, but, this one, everybody has to pull together. And not all Democrats have done that, I must say. Lately, I notice that it's gotten really a lot less, I would say 50 percent less.

But the same -- the bad ones, the Schumers and others, they will always say -- no matter how good you do, if you found a cure, and everything disappeared within 24 hours, they would say you did a terrible job, terrible, terrible.

And that's unfortunate for the country. But we live with it. And here I am in the White House. I'm president, and they're not. It's sort of an amazing factor, isn't it?

You can watch Trump's inability to tell viewers what he's doing to protect Americans - while Hannity pretends Trump is not completely inadequate to the task below, from the March 4, 2020 Hannity.

Bemused commented 2020-03-07 05:34:59 -0500 · Flag
While the CDC is trying to do its job, the WH is trying to sweep the whole issue under the carpet. I do, however, (to my deep shame) see a silver lining: the category that appears to be most vulnerable category are the elderly with pre-existing conditions, aka the viewership of Fox.

The image of Nero and fiddling while Rome burns, keeps coming to mind.

Gerald Paglucio commented 2020-03-06 22:59:19 -0500 · Flag
“As democracy is perfected, the office of the President represents, more and more closely, the inner soul of the people. On some great and glorious day, the plain folks of the land will reach their heart’s desire at last, and the White House will be occupied by a downright fool and a complete narcissistic moron.”

Steve St John commented 2020-03-05 16:43:33 -0500 · Flag
I stopped reading the article when I saw that there would simply be too much to comment on. A couple of observations: “Mike Pence is doing a fantastic job” reminds me of “heck of a job, Brownie.” Also, Hannity’s comment regarding the H1Ni virus, that " interestingly, in Obama/Biden years." Can’t miss any and all opportunities to say bad things about Democrats.