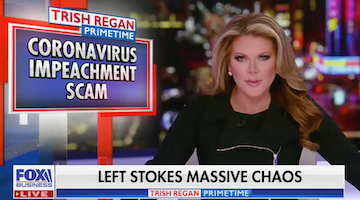 A few weeks after her “coronavirus impeachment scam” monologue went viral, Fox Business Network has dumped host Trish Regan. The network issued a statement that it had “parted ways” with its embarrassing employee.

You may recall that on March 9, Regan’s bonkers commentary (embedded below) suggested that anxiety over the coronavirus was little more than a Democratic plot or, as she put it “impeachment all over again.”

“This is impeachment all over again. And like with the Mueller investigation, like with Ukraine-gate, they don’t care who they hurt. Whether it be their need to create mass hysteria, encourage a market selloff unlike anything we’ve seen recently. Or whether it be to create mass hysteria in order to stomp our economy dead in its tracks. Don’t kid yourself. They told us how much they crave a recession as a way to get rid of Donald Trump!”

After Regan’s remarks went viral, her show, Trish Regan Primetime, was put on hiatus, about two weeks ago. Today, she was officially let go by FBN, The Daily Beast reported:

Fox Business Network announced on Friday that it has officially “parted ways” with anchor Trish Regan. …  “We thank her for her contributions to the network over the years and wish her continued success in her future endeavors,” the network said in a statement.

I certainly won’t shed a tear for Regan. But the fact is, she was only the most embarrassing or maybe most expendable host for Fox to make an example out of. Before the Fox networks changed their tune, right along with Donald Trump, bigger Fox stars, such as Laura Ingraham and Sean Hannity promoted the same message:

[T]here were more than two weeks of statements like Laura Ingraham’s assertion on Feb. 27 that Democratic criticism was “more unsettling” than the virus and Mr. Hannity’s allegation on March 9 that political opponents were trying to “bludgeon Trump with this new hoax.”

If only Regan had urged seniors to volunteer to die of the coronavirus, for the sake of the economy, she might still have a job!

You can watch the comments that got Regan fired below, from the March 9, 2020 Trish Regan Primetime, via Media Matters.

doors17 commented 2020-03-29 22:16:20 -0400 · Flag
I think the timing of her comments were off by a few days. If she would have said what she said the week before when the right-wing media was still playing the hoax game that was pretty much the message in the month of February, she would have been fine. The problem was on the same day is when Trump changed his position only because the stock market took a dump.

I guess her rating wasn’t very good because we’ve all heard worse from Hannity, Dobbs, and most of the entire lineup.

Was Fox’s Jeanine Pirro Drunk on Saturday Night? Twitter Seems to Think So: ‘Boxed Wine is a Hell of a Drug’ https://www.mediaite.com/tv/was-foxs-jeanine-pirro-drunk-on-saturday-night-twitter-seems-to-think-so-boxed-wine-is-a-hell-of-a-drug/

Anonymous commented 2020-03-28 12:38:57 -0400 · Flag
By far the main thing about Trish is her twisted thought process, so it’s admittedly catty, and it risks seeming sexist, to comment on her look. I apologize in advance for that. On the other hand, the look surely must have been part of what Fox was paying her for.

Image-wise, the most significant thing Fox loses with Trish could be the low ratio of the size of her nose to her face. Possibly for some Fox execs, that was the most Aryan look on TV.

In these times, Trish’s zippered black outfit could be a subliminal reminder of a body-bag. Subliminal reminders of death can promote conservative instincts, see: The Worm at the Core: On the Role of Death in Life.

Eyes On Fox commented 2020-03-28 10:13:58 -0400 · Flag
Bemused, Fox News/Fox Business News is clearly a sexist organization going back to its founding with Roger ‘Zipper Down’ Ailes’ casting couch. That said, with an audience of mostly decrepit sexually frustrated senior conservative males, they’ve always valued female talent as long as they look like classic Barbie dolls. Bleached blond (with more highlights than a movie trailer) Regan who appears to slather on her makeup with a finishing trowel fit that profile perfectly (she looks more plastic than Barbie).

Regan, I suspect, was a victim of internal politics. FBN isn’t known as a ratings leader last time I checked and she was so easily discarded I’m confident she was on the ratings rope before the dust up. Hannity is more than just a someone whose pants zip on the right, his right-wing vomit brings in huge ratings. Ditto Tucker. But zip on the left Ingraham is a big ratings draw too. She’s not going anywhere either despite her many outrageous – more outrageous than Trish – statements.

PS: It offends me no end to hear Trump constantly saying “that woman” instead of using the name of any woman who dares – I say! DARES – to criticise him, HIM!!!

Rw Fan commented 2020-03-27 20:51:37 -0400 · Flag
You know Regan didn’t really mean one word of the crap she spewed that night or any other night. They do it for the paycheck, thinking the more outrageous they are, the farther they will go at FOX.