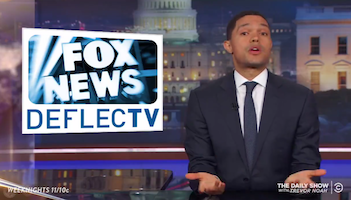 After Trevor Noah got through eviscerating Fox News tonight, the network would have something new to whine about in late night comics daring to talk gun control and the Las Vegas shooting. But I’ll predict Fox will remain mum about this… because just about every moment is hilariously damning. Especially the last bit about Hannity’s gun mojo!

Part of Fox’s politicization poutrage has been over late night comics talking about gun control in the wake of the Las Vegas massacre. That included The Daily Show’s Noah who discussed the subject Monday night.

Noah played a number of clips of Fox News pundits clutching their pearls over a supposed rush to politicization. We saw Brit Hume, Kevin Corke and Kimberly Guilfoyle.

“I like how Fox News says, ‘Please don’t politicize this today,’ as if there’s any time they’d be willing to talk about gun control.” Noah said. He added that we all know that there would never be a good time for Fox to discuss it – because they’ll be too busy talking about Hillary’s emails.

Then, for a kicker, he played Hume, Guilfoyle, and others happily politicizing the Orlando nightclub shooting the day after.

Noah also worked in a dig at Jesse Watters for making the shooting about NFL players taking a knee.

For the grand finale, he mocked Sean Hannity suggesting that he’s the guy you need in a mass shooting situation. “Dude, you couldn’t even protect women from being sexually harassed in your own building and now your Batman?” Noah retorted.

And then it got even funnier.

Watch the clip below and have some laughs on Fox!