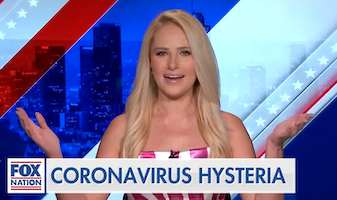 On Tuesday night, Sean Hannity exploited the COVID-19 public health emergency to smear Chicago, suggesting that it and other “Democratic-run cities” are more dangerous than the coronavirus. Hannity claimed he was putting the now-pandemic in "perspective" - that just happened to align with Donald Trump's "hunch" that the disease is far less dangerous than health officials are saying.

Earlier in the day, Lahren wrung even more hate mongering out of other peoples’ suffering. She exploited the COVID-19 public health crisis to ratchet up animosity against a Fox enemies list of California, immigrants and the homeless. Oh and the Chinese and the uber-villainous Trump critics too.

Media Matters caught her rant on her Fox Nation show (my emphases added):

LAHREN: Look, I don't want to get coronavirus any more than the next guy, but where is the hysteria over the California business-as-usual homeless epidemic, complete with your standard trash, rats, needles and feces on our streets and beaches?

China is ground zero for the coronavirus epidemic, but with the way Californians are acting, you'd think Armageddon was coming. For starters, we've got 21 confirmed coronavirus cases on a cruise ship docked in Oakland Harbor, on which quarantined passengers are reportedly fighting over rotten food.

Now, I'm not saying that doesn't sound absolutely miserable, and I'm definitely not saying those passengers should be allowed to mingle with the general public, but goodness gracious, when did Californians suddenly become concerned with vetting anyone for any reason?

I mean, last spring we averaged 100,000 apprehensions a month at our southern border, people from God knows where here for God knows what reason, but I believe our illustrious Governor Greasy called that a "manufactured crisis," am I right?

But now, the sky is falling because we have a few dozen cases of coronavirus on a cruise ship?

We haven't always had a toilet paper shortage in the Golden State, but you'd think so, given the fact we do have a rather serious issue with public defecation.

And call me crazy, but I am far more concerned with stepping on a used heroin needle than I am getting the coronavirus, but maybe that's just me.

Yeah, I do think we have far bigger problems in this state than a docked cruise ship and some coronavirus.

Predictably, she went on to praise Trump's "decisive action" and called criticisms of him "the same tired song and dance." As if she had put forth a single original thought. But tired or not, Lahren now used the opportunity to rehash a litany of grudges and grievances against anyone who doesn't worship at the Altar of Trump the way she and her colleagues do.

She concluded this screed by saying, "God bless."

I have previously described Lahren as a millennial version of Ann Coulter but with less wit and charm. She proved me right again here.

You can see why I say so below, from Fox Nation’s March 10, 2020 Final Thoughts with Tomi Lahren, via Media Matters.

Lawrence Geller commented 2020-03-13 09:33:27 -0400 · Flag
I want to see Tomi and Hannity onboard this cruise ship, shaking hands with the passengers (Purell free), and lifting a glass in support with their Dear Leader at the Midnight Buffet, and THEN tell whether or not the sky is falling!

For some reason, it is often worst at this time of year, too.

I agree that the foxies are outdoing themselves in the realm of stupid comments. This week’s choice will be a hard one.

John McKee commented 2020-03-12 15:14:51 -0400 · Flag
25th Amendment time? Trump’s Republican patsies, even the group of utter sycophants in his cabinet, must now understand that Trump is their road to nowhere. Pence would be an incredibly long shot to reverse their prospects by November, but is there any alternative?

Incidentally, the current plague of name-name spamming is one for the record books too. I happened to have my email inbox open a few minutes ago, and I got six or seven comment notifications bang bang bang about 1 second apart, so it looks like some sort of automation is being used to blast them out in bulk.

You have to wonder about the financial viability of this kind of ‘business’. The cost would be negligible, of course, but these attempts to find new suckers gormless enough to fall for their illiterate offerings must have a vanishingly small response rate.