On Fox News, MSNBC is normally Enemy #1 on the Axis of Evil Liberal Media. But, apparently, there's one thing Fox hates more than MSNBC and that's a (black) Democratic president.

Do you see a pattern on the page of today's Fox Nation? 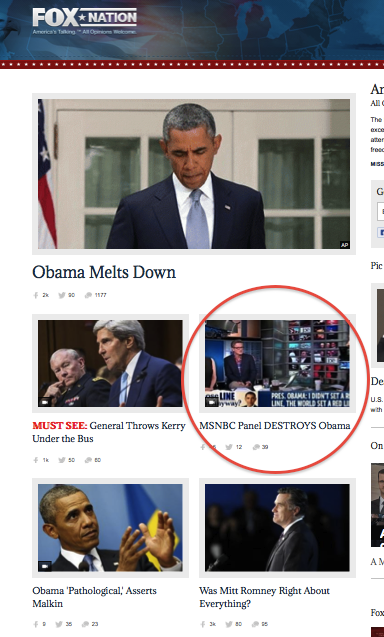 Fox Nation's MSNBC post is an excerpt and a link to a post at their BFF Mediaite, but "civil," "tolerant" Fox Nation changed Mediaite's headline from, "Morning Joe Panel Rips Into Obama’s ‘Baffling’ Syria Push: ‘He Has Got to Lead’" to the more inflammatory, "MSNBC Panel DESTROYS Obama."

The first paragraph of the post is quoted exactly, i.e., it's sufficiently inflammatory:

The hosts and panel guests on MSNBC’s Morning Joe tore into President Barack Obama’s handling of the crisis in Syria on Thursday. Host Joe Scarborough said that Obama had put the United States in the position of having to go to war with his careless drawing of a “red line” relating to chemical weapons and his “default position” of demanding abusive leaders surrender power. His guests agreed and wondered why the president was not leading on the issue of Syria.

truman commented 2013-09-05 15:10:51 -0400 · Flag
The Fux Nation is a cesspool of hate. The racist turds thrash about in a hateful frenzy at the mere mention of that black guy who has the audacity to live in their White House.

Until I was banned from the site, I used to enjoy jabbing back at the turds with a few insults of my own.

Lakeview Greg commented 2013-09-05 14:11:15 -0400 · Flag
MSNBC has an issues with the President’s policies. FNC has an issue with the color of the President’s skin. Don’t believe it? All you have to do is question a rightie. Ask why do you feel that way to each thing they say and it eventually comes down to skin color about 99 44/100 % of the time. Very sad and pathetic.

NewsHounds posted about Suddenly, Fox Nation Likes MSNBC - Now That They're Criticizing Obama On Syria on NewsHounds' Facebook page 2013-09-05 14:08:23 -0400
Apparently, criticizing President Obama is all it takes for MSNBC to get into Fox's good graces.