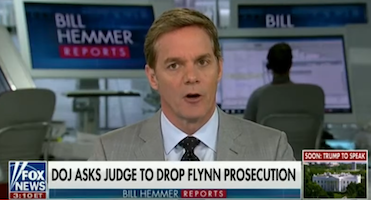 McFarland began by calling today “a great day for the republic.” But a Flynn exoneration (it still has to be approved by the judge) was not enough for her. She wants revenge.

MCFARLAND: My assumption is that the Justice Department has determined that there are an awful lot of more incriminating documents that are going to come out about the people who are at the very top of the Justice Department and the FBI, and potentially even in other intelligence agencies or even in the Obama White House who are involved in this.

No question from Hemmer on any of that!

McFarland went to say Flynn was “blackmailed” by the FBI and they “threatened to charge his son unless Flynn pled guilty to a crime he didn’t commit.”

Here’s what Lawfare has to say about that:

In fact, if prosecutors did use Flynn’s son as leverage, this is within the range of normal prosecutorial hardball. Flynn’s consulting group, with which his son was employed, engaged in practices that raised legal questions under the Foreign Agents Registration Act, exposing both father and son to potential criminal liability. (And that’s before we get to the reported involvement by both Flynns in a possible plot to kidnap cleric Fethullah Gulen on behalf of the Turkish government.) Prosecutors were apparently willing to forego other charges against Flynn in exchange for his cooperation and plea to the single felony. According to the Covington [Flynn’s former defense attorneys] emails, the prosecutors apparently would not promise to forego further charges against Flynn’s son, although they signaled that they were “unlikely” to move forward against him if they received satisfactory cooperation from his father.

But Hemmer didn’t say a word. His follow up was to ask if McFarland had been expecting the DOJ’s decision. (No, she had not.)

His next “question” was little more than a prompt for McFarland to attack the whole Mueller investigation. “All the matters surrounding Russia. Where are they now or … do they appear to have gone up in smoke in Washington, D.C.?” Hemmer asked.

Not surprisingly, McFarland said, “It was all a scam from the very beginning.” She falsely claimed the Steele dossier was “Russian disinformation” and “a fake thing” that was “seized on” as “an excuse” to investigate Flynn, Trump and others and to “try to trick people into committing some crime or something that they could claim was perjury and then try to force you to turn on others.”

FACT CHECK: Information about George Papadopoulos, not the Steele dossier, was what started the Russia investigation. Nevertheless, many elements of the dossier have held up.

Hemmer mentioned none of that. Instead, he prompted for more attacks. “Hmm. You talk as though you’re a person who feels vindication now, do you?” He cocked his head to the side and put a pensive expression on his face, as if he had asked a thoughtful question.

“Not yet,” she said. Apparently, the America-hating MAGAs won't be happy until they destroy our institutions. She continued, “Until the people who did this are held responsible and the sunlight shines on the things that the Justice Department and the FBI were doing … I firmly believe that it was a group of people at the highest levels of the intelligence community who didn’t like the election outcome and so they were going to do what they could, abusing their power to try to hobble a duly-elected president of the United States.”

You can watch Hemmer play handmaiden to Trumper propaganda below, from the May 7, 2020 Bill Hemmer Reports.

Kevin Koster commented 2020-05-08 15:33:56 -0400 · Flag
Given that the judge in the case (who’s a Right Wing Republican) already went after Flynn in court quite publicly, this will be an interesting situation to watch develop. I’m honestly unsure if he simply gavels out the matter or if he makes a public show of disputing it.

Either way, it’s clear that the Pence White House has no intention of allowing this case to proceed. I note that an actual prosecutor on the case made a specific point of stepping down just as Barr and Jensen were playing their toadie games with it.

Assuming that people show up to vote this November, I would hope that the next actual Attorney General will investigate this cover-up as thoroughly as possible. I have a feeling that some Pence White House people could be looking at criminal subpoenas next year.

Eyes On Fox commented 2020-05-08 01:12:19 -0400 · Flag
I have no interest in reading McFarland’s book for the answer but how could she fill the pages of a book data-mining less than half the facts? She plagiarizing QAnon Michael Flynn conspiracy theories off of 4Chan?

This gets back into my cliché you’ve got to be most afraid of what Fox News isn’t telling you. Not getting a lot of press – none from them or Trump’s “I’ll never lie” Press Secretary – but also in the notes was a later comment the FBI didn’t recommend interviewing Flynn to try to get him to get him fired or to lie. Not to mention when’s the last time you heard Fox News complain some black guy was put in jail using the same sort of standard aggressive police tactics?

We can relitigate the case with a mountain of evidence but it’s a rerun of the Mueller investigation. Corrupt Trump finally found his equally corrupt AG to do his dirty work, be his fixer.