Senator Ted Cruz visited The Kelly File tonight where he got more than eight and a half minutes of friendly air time to both attack President Obama’s plan to take executive action on immigration and promote his latest government shutdown scheme that he plans to blame on Obama.

“The president is behaving in an unprecedented way,” Cruz announced.

That is, if you don’t count the similar orders issued by Presidents Ronald Reagan and George H.W. Bush. Not surprisingly, Kelly didn’t mention that. She sat there with a, “This is so interesting” expression as Cruz went forward with the smears:

There is not in recent times any parallel for a president, repudiated by the voters standing up and essentially telling the voters, “Go jump in a lake,” He’s gonna force his powers.

That must be quite different than when Ted Cruz orchestrated the last government shutdown in order to force a defunding of ObamaCare, not long after the voters had just re-elected President Obama. Either that, or Megyn Kelly just didn’t want to risk making him look bad by pointing out his disingenuousness and hypocrisy.

Instead, she giggled as Cruz joked about Democrats who support Obama as having been smoking pot.  Finally, at 5 minutes into the discussion, Kelly asked what, specifically, Cruz wants to do in response to Obama’s likely executive action.

CRUZ: Step one: The new Senate majority leader, Mitch McConnell, should stand up and say, “If you disregard the Constitution, if you disregard the law, if you issue this executive amnesty, the new Congress, for the next two years will not confirm a single nomination – judicial or executive other than vital national security positions until you end this illegal amnesty.”

Kelly finally thought of a challenge, albeit one that seemed to be looking out for the GOP. She said the president would never sign such a bill and that he’d then blame the Republicans for not funding veterans’ care.

When Cruz blamed Obama for the last shutdown, on Face The Nation, host Bob Schieffer laughed in his face. So did the audience at a forum last November when Cruz tried to make the same claim. And Jon Stewart pretty much destroyed Cruz’ claim in a Daily Show segment (you can watch it below).

But Kelly never uttered a peep of challenge.

By the way, if Cruz’ Twitter feed is any guide, my faith in Americans has been restored. 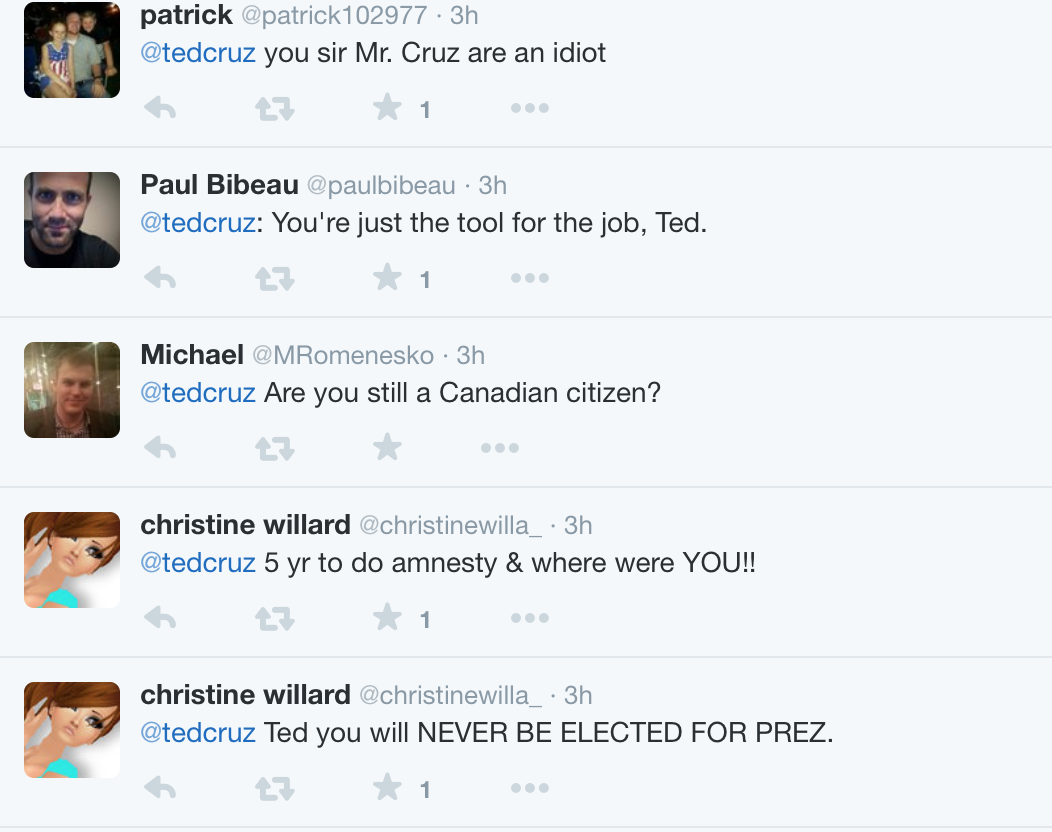 scooter commented 2014-11-20 16:00:07 -0500 · Flag
Previously I would have said “bring it on, shut down the gov’t – see how that works out for ya” to the repubs. But we see how it worked out. Americans, those that voted, either didn’t care, didn’t believe, or didn’t remember who shut down the gov’t last time – the repubs. But with the help of FOX, Amurkans blamed the President for the shutdown, and at midterm election time nobody gave a rat’s ass about who actually forced the shutdown.

Americans memories are short, incredibly so in matters like this. All they care about is getting the Black Man out of the White House, reasons & logic be damned.

Richard Santalone commented 2014-11-20 07:23:04 -0500 · Flag
In my honest opinion, this is looking VERY SIMILAR to the infamous Communist witch hunts of the 1950s that were engineered by Joe McCarthy. That’s why, in my book, because he once called Harvard University “a hotbed for Communists”, I will ALWAYS call Ted Cruz “McCarthy Cruz”.