Sen. McConnell: Workers Must Be ‘Brave Enough’ To Go Back To Work Without COVID-19 Protection 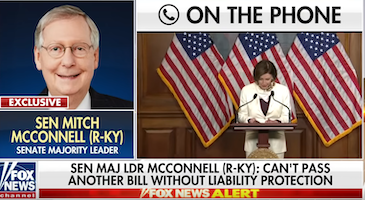 Sen. Mitch McConnell joined the Fox News culture of death yesterday when he decided it’s time to rein in spending (but not tax cuts for the wealthy) and demand that workers be “brave enough” to go back to work without any guarantee employers will protect them from COVID-19.

Before he got to playing the role of Grim Reaper directly, Majority Leader McConnell looked forward to retirees losing their pension funds.

“We’re certainly open to considering additional assistance to state and local governments on top of what we’ve already done in the CARES Act,” McConnell said when asked to respond to Senate Minority Leader Chuck Schumer warning of massive state layoffs if aid is not appropriated. “It’s important, however, to understand that many states have systemic longstanding challenges. Many of them pension funds, many of them overspending, so what we’re saying here is we’re not interested in rescuing badly-run states from the mistakes they’ve made, completely unrelated to the coronavirus.”

But McConnell is 100% willing to protect badly-run companies who endanger the lives of employees. “We’re open to considering another bill, but my red line going forward on this bill is we need to provide protection, litigation protection for those who’ve been on the front lines," he said. "Imagine you’re a businessman thinking about reopening and you’ve heard that the trial lawyers all over the country are sharpening their pencils getting ready to sue you, proclaiming that you didn’t engage in proper distancing or other issues related to health and safety.”

“Look, we can’t pass another bill unless we have liability protection and that’s the only way we’re going to ultimately begin to get past this and that is to begin to open up the economy again,” McConnell continued. “We have to have businesses brave enough to open up again, employees brave enough to go back to work and I’m glad to see that some of the states are beginning to move in the direction of re-opening.”

“The Senate isn’t interested in passing a bill that does not have liability protection,” McConnell replied. He called that “an integral part of our economy getting back to normal.”

Even pro-business Cavuto seemed concerned about giving businesses a green light to risk employees’ health. “What would happen though, Senator, if a business feeling that it is emboldened by liability protection that it doesn’t do some basic things like masks and other protections for workers because it might feel that it’s legally bulletproof and doesn’t have to?”

McConnell shrugged that off as a state's problem. “You have to carefully craft a liability protection to deal with the money that would be supplied to state and local governments conditioned upon them acting at the state level the kind of legislation that would provide liability protection for those seeking to go forward and to get the economy back up to work.” So if a state he considers not well-run enough to get federal aid isn’t able or chooses not to enforce worker protections, it’s just too bad for the workers, apparently.

“Look, Neil, I’ve been talking to business people all over the country. There’s a good deal of fear about getting back to normal knowing full well the lawsuits that are awaiting unless we address this issue,” McConnell added. He said nothing about the fear of illness and death that workers might be feeling about going back to work.

You can watch Grim Reaper McConnell below, from the April 28, 2020 Your World.

Eyes On Fox commented 2020-05-02 10:09:09 -0400 · Flag
Does it work? Sounds like the state set up a system where they benefit the most, victims get some income support. We back to set amounts for an eye, leg, etc.? While the essential lesson is the same: The way to get a company to change behavior is hit their pocketbook hard.

John McKee commented 2020-05-01 00:54:12 -0400 · Flag
About 45 years ago, we went to a no-fault accident compensation system, funded by a small surcharge on individuals’ and companies’ taxes. It took away our right to sue, but penalties for corporate negligence were upped considerably and employers’ levies were calculated according to their safety record. To begin with, victims were eligible for lump-sum payments, but we’ve gradually evolved to mostly income support.

When punitive measures are called for, fines go directly to the state and to the considerable fund built up over the years for major events.

Anonymous commented 2020-04-30 22:36:05 -0400 · Flag
Tort reform is not making those in power legally bulletproof (to use Cavuto’s term). In my view, the two needed reforms are: 1) adopt the English Rule, whereby the loser of a lawsuit pays the legal expenses of the winner, and 2) whenever possible, requiring steps to prevent future misbehavior should be preferred over punitive damages, and in cases where the latter are levied, pay only a portion of punitive damages to the winner—the rest should go to the government (but not to the courts).

Republicans unsurprisingly want to protect businesses like McConnell here. While Mitch is getting more extreme than we typically hear pimping eliminating liability, their typical war cry is strictly limiting amounts to protect their investments… errr… businesses. Which sounds reasonable and like consistent justice, I suppose. $50,000 for an eye. $100,000 per leg. Maybe $250,000 for a life. Whatever.

The problem is there was a case of a car company (Ford or GM, can’t recall which) having a vehicle safety defect. They cynically used statistics to predict the number of fatal accidents. Used average jury awards to calculate total projected costs and figured letting people die was cheaper than a recall.

I don’t know the solution. What is the right amount to get a large corporation’s attention to change bad behavior? Or do you just throw the negligent or incompetent in jail? Or leave it to organizations to police their own? How do you deal with medical incompetence? Like the guy who got the wrong leg cut off I was told about the last time I was in the hospital getting marked up for surgery.

The flip side is I was a witness in a trial against a contractor by a subcontractor both whom worked for me and my personal experience is juries can make dubious, emotional decisions not necessarily consistent with the facts. In this case they ignored the evidence and took the easy road to simply split the difference between the 2 parties. In truth, the subcontractor grossly underperformed, their contract was terminated for cause consistent with the contract, and they were paid for work billed up to the termination. Naturally they wanted full payment for work never performed. It was a complicated (one courtroom wall was stacked with defense evidence boxes), highly technical case and during jury selection the plaintiff’s lawyers successfully made sure the jurors were non-professionals (most were unemployed there for the pitiful jury pay), as uneducated as possible and as ignorant of the general subject matter as possible. Their strategy worked.

A friend I know was was on a civil case jury and her fellow jurors sympathized with the little guy versus a corporation so they totally ignored any facts not favoring the plaintiff and behaved as if it was the plaintiff’s lucky day. Like hitting the lottery.

We need the legendary wisdom of Solomon for this one.

John McKee commented 2020-04-30 14:22:59 -0400 · Flag
This issue of liability waivers certainly baffles a foreigner like me. Everything I’ve ever observed about your system is that one of the foundation stones is the right of anyone to sue the arse off anyone else, for ludicrous amounts, whether an injury is caused wilfully, by accident or oversight. And that the principal way to finance such actions is through the services of predatory, percentage-sucking ‘trial lawyers’.

That’s all fine and dandy if you don’t mind paying through the teeth for health and many other services due to practitioners having to carry ridiculous amounts of liability insurance for any conceivable incident. But can such an embedded ‘right’ of citizens be simply washed away at the stroke of a president’s pen? I know Congress has already granted a get-out-of-jail-free card to gun manufacturers – are they now intending to wipe death and injury liability for every business and individual just as long as this particular virus is the weapon of choice??

McConnell is holding fed funds to state & local governments, and implicitly even some funding for testing, hostage until the Dems cave on “liability reform”.

Cavuto’s question about bad actors was a good start, but McConnell blew it off with, ’That’s a good question…carefully consider.. change subject’. The most charitable interpretation of Cavuto’s lack of follow-up was that he was bought off with flattery. McConnell didn’t treat the question with respect, but at least he SAID he did. More likely, it was another instance of Fox inoculation: viz. in the face of an inconvenient truth that is just too obvious, briefly lifting the Fox curtain to provide a glimpse of the truth, then quickly dropping the curtain as though nothing of significance were there. It’s the way Tucker Carlson dealt with the record of massive coronavirus misinformation that flowed from his colleagues at Fox.

Eyes On Fox commented 2020-04-30 10:53:33 -0400 · Flag
I need more help from Neil Cavuto than his predictably softball interview offered. There appears to me to be a congruency problem with McConnell’s statement. Not my shocked look.

So at a 10,000 foot level McConnell is championing a return to work, the current Fox News MAGA Death Cult mantra. He claims (read lies) states are meeting Trump’s Phase 1 standards to rationalize this stance. However, if hard statistical evidence is sounding the all clear (it’s not) then why the freak out employers need blanket liability protection? Maybe because it’s not safe?

Interesting to me is McConnell avoids completely directly answering Neil’s obvious question about liability protection for employers who are bad actors and don’t provide adequate safety. It’s an easy, softball question. CDC has provided guidelines. All McConnell has to do is say legislation will require they adhere to them. But he doesn’t. Implicitly he’s saying negligence should be protected by the Federal government which I don’t even think even passes basic legal muster.

I also see some political gamesmanship. Trump has infamously considered tying coronavirus aid to an end of sanctuary cities. McConnell seems to be playing a similar game in saying he doesn’t want to fund those darn librul policies like pensions.

Just f—k all this! Democrats need to take the Senate in 2020!

John McKee commented 2020-04-29 23:37:22 -0400 · Flag
Sometimes I hope and almost pray that all the hate-filled, holier-than-thou Christianists in political, evangelical and RWNJ Catholic circles actually believe in the vengeful sonofabitch god they purport to speak for.

That way, we would at least have the satisfaction of knowing that every time the lights went out, they’d be quietly roasting in whatever hell their perverted psyches could imagine.

Thx4 Fish commented 2020-04-29 21:26:52 -0400 · Flag
I think Fox may be damaging its reputation by this drum beat of economy over individual. Those I know who are regular Fox consumers (yes they are mostly vulnerable seniors) they are NOT all in on this get-back-to-normal attitude. They don’t tune out from Fox, but they are taking it all with a large grain of salt. They are not going to be risking themselves nor their families lives by gulping down the Fox propaganda line as they usually do. If things go poorly in this Republican reopening of states, this could and should damage Fox as well.