Sen. Duckworth Has Some Choice Words For Tucker Carlson About Patriotism 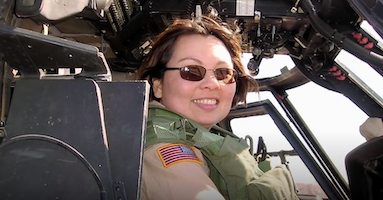 Sen. Tammy Duckworth fired back at Tucker Carlson for attacking her patriotism, in a New York Times op-ed this evening. It could make you stand up and cheer.

As The New York Times reported yesterday, Duckworth is being considered as a running mate by Joe Biden. The Times also noted:

VoteVets, the liberal veterans organization that has pushed for Mr. Biden to choose Ms. Duckworth as his running mate, on Wednesday morning posted a video calling Ms. Duckworth “tough as hell” and accusing Mr. Trump of being scared to run against her.

“He sicced Tucker Carlson on a suicide mission to take her down,” the video’s narrator says.

Today, Duckworth came out with this:

Even knowing how my tour in Iraq would turn out, even knowing that I’d lose both my legs in a battlefield just north of Baghdad in late 2004, I would do it all over again. Because if there’s anything that my ancestors’ service taught me, it’s the importance of protecting our founding values, including every American’s right to speak out. In a nation born out of an act of protest, there is nothing more patriotic than standing up for what you believe in, even if it goes against those in power.

Our founders’ refusal to blindly follow their leader was what I was reflecting on this Fourth of July weekend, when some on the far right started attacking me for suggesting that all Americans should be heard, even those whose opinions differ from our own. Led by the Fox News host Tucker Carlson and egged on by President Trump, they began questioning my love for the country I went to war to protect, using words I never actually said and ascribing a position to me that I do not actually hold.

She went through Carlson’s deceitful twisting of her comments about George Washington and Confederate statues (which I wrote about yesterday), then she went on offense – always a good idea with bullies.

They’re doing it because they’re desperate for America’s attention to be on anything other than Donald Trump’s failure to lead our nation, and because they think that Mr. Trump’s electoral prospects will be better if they can turn us against one another. Their goal isn’t to make — or keep — America great. It’s to keep Mr. Trump in power, whatever the cost.

It’s better for Mr. Trump to have you focused on whether an Asian-American woman is sufficiently American than to have you mourning the 130,000 Americans killed by a virus he claimed would disappear in February. It’s better for his campaign to distract Americans with whether a combat veteran is sufficiently patriotic than for people to recall that this failed commander in chief has still apparently done nothing about reports of Russia putting bounties on the heads of American troops in Afghanistan.

Mr. Trump and his team have made the political calculation that, no matter what, they can’t let Americans remember that so many of his decisions suggest that he cares more about lining his pockets and bolstering his political prospects than he does about protecting our troops or our nation.

Do read the rest of her op-ed. It will likely make your day.

I don’t know what Joe Biden thinks but I think this woman would make an excellent vice president.

You can watch VoteVets' great video defending Duckworth below.