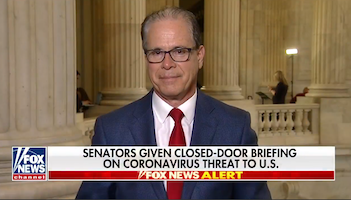 As Americans face a coronavirus pandemic with a public health system sabotaged by Trump, Republican Sen. Mike Braun covered up for him by making irrelevant attacks on Democratic Sen. Chuck Schumer and impeachment while conveniently avoiding specifics of government preparations.

Predictably, none of the extremely damning facts in a Foreign Policy article called, “Trump Has Sabotaged America’s Coronavirus Response” were included in this discussion. Instead, Braun gave only general reassurances about the Trump administration’s readiness. “Across the board, I think we’ve got the infrastructure and we are prepared,” Braun said. Then, in his next breath, perhaps to avoid going into any details, Braun began attacking Schumer. “And I know that Chuck Schumer’s been doing the Schumer shuffle with trying to say otherwise and I think that it’s sad because it’s not the case.”

Still avoiding specifics about readiness, Braun kept up his attacks on Schumer, as if he were responsible for the federal government's preparations for the coronavirus (COVID-19). “We have a guy like Leader Schumer doing that with baseless ‘we’re not prepared,’ with no good reasons.”

“It reminds me of impeachment, when he was doing the same thing,” Braun continued, as if that had anything to do with a potential public health emergency. Then he gave a little plug for himself while he was at it, saying it “also reminds me of my campaign I ran for six months against him orchestrating that kind of baloney. You gotta have foundation if you’re going to say something like that, and I didn’t sense that at all.”

The only details Braun provided about government readiness was, “We’ve got the facilities, we’ve got the technology, we’ve got the ways of treating” our “few cases.” Later, he regurgitated administration talking points without indicating any sign of independent verification: “What I heard today, across five different agencies, is that we’re prepared.” He added, “I do know for certain that we’ve got much better infrastructure than any place in the world.” But then he hinted that the situation may not be so rosy: “It is a new, virulent form of coronavirus and we’re gonna learn from it. We can't take it lightly,.”

Not mentioned? Such details as were included in the Foreign Policy article by Pulitzer Prize winner Laurie Garrett: “In 2018, the Trump administration fired the government’s entire pandemic response chain of command, including the White House management infrastructure. … [O]ther White House efforts included reducing $15 billion in national health spending and cutting the global disease-fighting operational budgets of the CDC, NSC, DHS, and HHS. And the government’s $30 million Complex Crises Fund was eliminated.”

But there was still time to keep up attacks on Schumer. “I don’t like it when Schumer is out there saying that we’re ill-prepared and with no good reason to say that. I think we are ready and it remains to be seen.” He went on to accuse Schumer of acting like the Hatfields and McCoys and of trying to “sensationalize” the subject.

You can watch this attempted cover up below, from the February 25, 2020 Your World.

First off, Trump tried to cut the CDC budget but was blocked in his efforts. Trump, however, was successful in drying up grant money to states, severely impacting local public health. The funding to fight Coronavirus is from emergency CDC funding set aside by Congress.

So Fox News and Trump can thank Congress for saving him from his worse impulses.