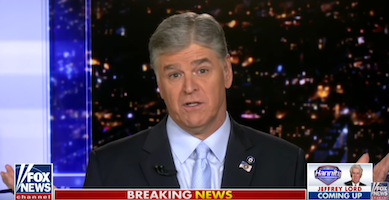 What’s a Trump shill like Sean Hannity to do when the Trumpy governor of Florida has so utterly failed in his response to the coronavirus that the state has become one of the worst COVID-19 hotspots in the country? Pretend otherwise, of course.

Media Matters caught Hannity’s disingenuous (at best) comments on his radio show yesterday. First, he echoed the ridiculous claim of his Bedtime BFF that testing is responsible for the rise in cases – which was debunked by Hannity’s own Fox News colleague. He also conveniently ignored a whistleblower’s allegation that Florida has cooked its books in order to undercount the cases. And he pretended that Florida “has protected the elderly there” (debunked below). But the worst part was his suggestion that it’s a good thing so many people got sick and died:

HANNITY: And although they've made so much progress [with testing], what are we up to, 55 million Americans tested now? I mean, crazy numbers. Nobody goes near this amount of testing, and you get more positives when you do it, but the one thing -- assuming the same pattern holds, Florida, sunbelt, Texas and Arizona, it appears it is --

I'd say by the end of August, early September, you know, what we see, what we've witnessed unfold is the increase of people with antibodies is gonna, you know, it's gonna still the waters in Florida, but they still protected the elderly there. The opposite of what New York, New Jersey, Pennsylvania and Michigan did. Love watching Cuomo lecture everybody on corona.

How bad are things in Florida right now? According to The New York Times, although there has been a small decrease lately, there have been at least 451,415 cases there and 6,332 deaths. The Times also reported that Florida is among the 21 states in the U.S. with outbreaks serious enough to place them in the “red zone,” according to a federal report dated July 26. Yet Trump-worshiping Ron De Santis has issued an emergency order to re-open schools in August.

Last month, the Tampa Bay Times reported that more than half the then-3,546 deaths in Florida were tied to outbreaks in long-term care facilities. That paper also debunked De Santis’ copycat claim that a rise in testing was behind the rise in cases.

This is not the first time Hannity has distorted the obviously-failing efforts of De Santis, whom Hannity campaigned for. In April, Hannity gave De Santis a friendly platform to promote his plan to re-open Florida. “How did you do this because I would think Florida would have been one of the worst-hit states,” Hannity said admiringly.

De Santis boasted then that his state had “focused on a laser [sic]” and sneered, “People were predicting us to be worse than New York, like another Italy.” This week, Florida surpassed New York in the number of coronavirus cases.

Hannity, in turn, held up De Santis as a model for other governors to follow. "Maybe we can learn something from this, is that you’re telling people, go outside and get some sun. Don’t hide in your house,” Hannity complimented, in April.

Yeah, we learned something, alright. Despite his worthy call for mask-wearing, Hannity is still more interested in promoting his politics than truth or the health and safety of Americans.

You can listen to Hannity “lecture everybody on corona” below, from the July 29, 2020 The Sean Hannity Show, via Media Matters.

Update: The clip is embedded now. I left it out when I first published this post.

The President of Ubiubibezibezistanstan will deliver Herman’s eulogy.