Ever on the lookout for new ways to attack President Obama, Sean Hannity struck new lows of pettiness: complaining President Obama took too long to answer questions at yesterday’s press conference. Hannity began his show last night by sneering that “during the 47-minute filibuster,” Obama only took six questions. Apparently, Obama didn’t get the memo that he had a Hannity-imposed time limit. And a stop watch, apparently. Hannity was so eager to malign our president, that he actually timed the answers, made large graphics with the times and then howled about their length. As if that had anything to do with the substance of Obama's remarks.

“His first answer lasted more than five minutes,” Hannity sneered, as a graphic on the screen blared: LENGTH OF ANSWER #1: 5 MINS, 3 SECS.

“Then came my favorite answer of them all,” Stopwatch Sean continued. “He actually had to spend eight minutes, five seconds trying to explain why his second term hasn’t been a complete and utter failure. That’s a pretty tough sell.” Yeah, after a little more than three months into his four-year term, Obama should just pack it up and go home now, eh? I guess Hannity can hope.

After a few more minutes of Obama bashing, Hannity pulled out the rhetorical stop watch again. “Getting back to the minutes of the press conference, as Obama moved to finish his time at the podium, guess what? He closed with an 18-minute monologue marathon where we learned that he still believes that Gitmo needs to be closed.”

In fact, President Obama was responding to a question about the prisoners' hunger strike over the conditions at Guantanamo Bay prison. And President Obama didn't just reiterate that he still wants Gitmo closed but said he'd renew efforts to do so. He also said that he feels the prison harms our counterterrorism intelligence-gathering efforts and is a "recruitment tool for extremists." But Hannity was so busy with his stop watch that he must have forgotten about his intel-failure worries.

Fox News: where hate mongering over form is more important than any substance.

Full video below the screen grabs. 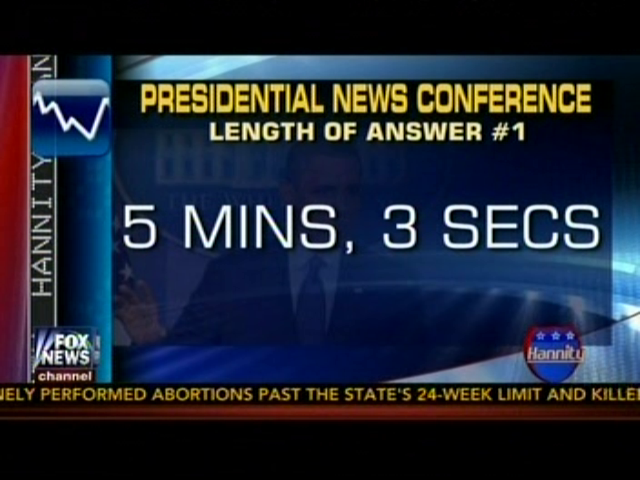 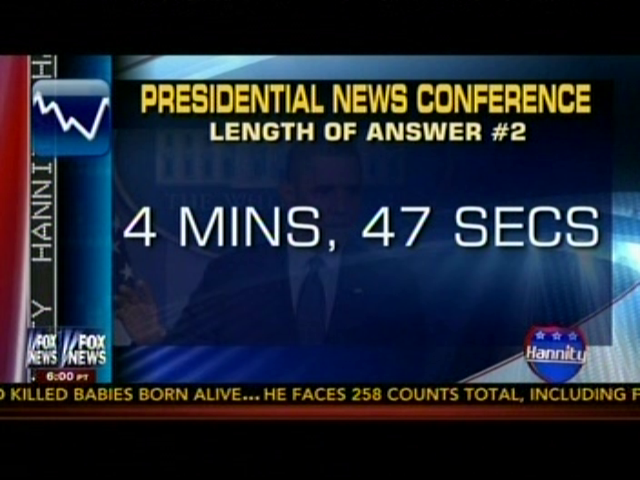 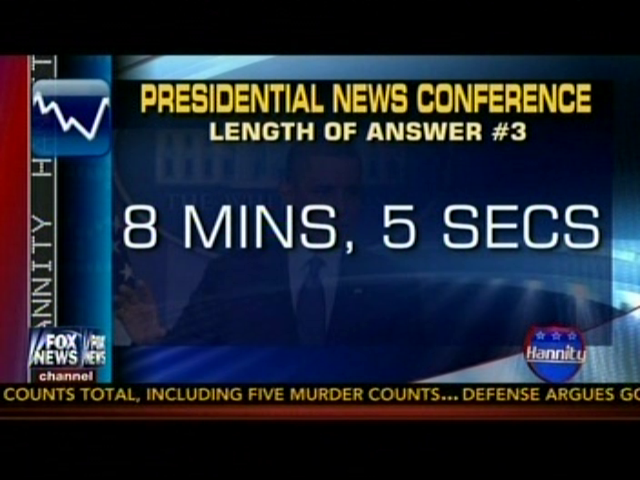 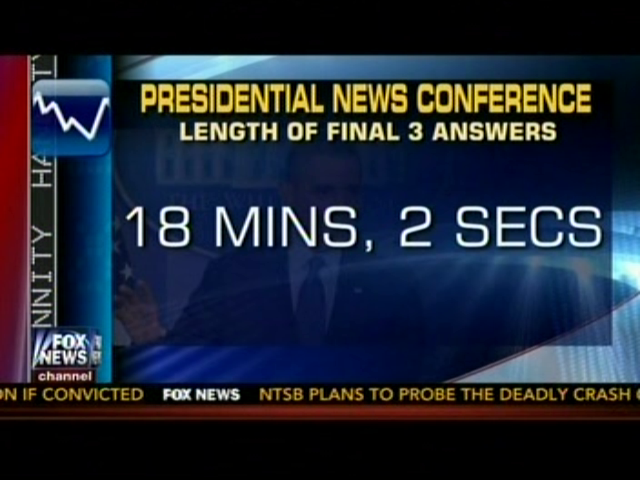 Organizations pay big bucks to invite High End Hannocchio to speak at their events. One time, this narcissistic Long Island Lolito was invited to speak at Talkers conference in New York City. It was a power-point presentation to his colleagues. It was awful. Hannocchio did not stay on topic. He would talk about one topic, then all of a sudden, he would switch to another topic. You would need extra strength aspirin for the migraine following his so-called presentation. It gets worse. Near the end of his presentation, Hannocchio played audio excerpts from several radio shows. The audio contained very vulgar language laced with numerous f-bombs and strong sexual content. This coming from a man who says he’s a so-called “christian.” It was disgusting and embarrassing.

If organizers had a brain, they would hire local speakers who can do it for less money, and do a superior job compared to this narcissistic, thin-skinned, short-tempered bully.

Beck will be a keynote speaker at the Houston NRA event. We bet he will draw a bigger crowd than you. Your audience abandoned you for him.

Homeboy Halligan commented 2013-05-01 22:36:22 -0400 · Flag
Something is up at Fox. Ailes must be freaking out at everyone there as for the past couple of days the hate and venom toward the President is worse then ever(if that’s possible) My theory is that great economic news is on the horizon and Ailes knows the President’s approval rating is going to skyrocket and that the Dems could take control of the House in 2014.

Or about the SEVEN US Embassies overseas that were attacked under the Dumbya misAdministration:

Hannity was so eager to malign our president, that he actually timed the answers, made large graphics with the times and then howled about their length.

Well now, you have to understand.

To Insanity and his brain-dead audience of droolers, anything over bumper-sticker length is incomprehensible — hence, their fascination with Bushisms like, “Bring ’em on.”

That a US President would answer questions in detail, thoughtfully, and intelligently — and have dark skin, to boot! — is completely foreign to them . . .

NewsHounds posted about Sean Hannity: Obama Press Conference Answer Police on NewsHounds' Facebook page 2013-05-01 21:02:45 -0400
Apparently, President Obama didn't get the memo that he had a Hannity-imposed time limit for his answers.