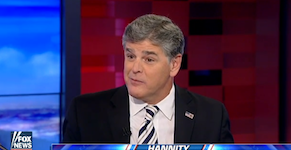 Isn’t it funny that ever since Hillary Clinton demolished Donald Trump at the first presidential debate, Sean Hannity seems to have forgotten that for weeks leading up to it, he was accusing her of being brain damaged? Well, move over “brain damage.” Hannity is now promoting "heart trouble" instead.

Last night, Hannity hosted discredited author Ed Klein, out with a new anti-Clinton book, for some unsourced allegations about her health. Possibly even worse was that the other guest, Fox News Democrat Doug Schoen, not only didn’t challenge a word, he offered campaign-strategy tips for Trump to win.

Klein’s [sic] has a long history of promoting false conspiracy theories about the Clintons, including the claim that Chelsea Clinton was conceived when Bill raped Hillary.

Klein’s previous work has been panned by both conservative and mainstream media figures alike. The Washington Examiner’s Byron York said his last book, Unlikeable: The Problem with Hillary, was “denounced as a whole pack of lies,” and in 2014 even conservative radio host Rush Limbaugh dismissed Klein’s unsourced quotes as “odd.” Over 30 mainstream reporters slammed Klein’s work as “poorly written, poorly thought, poorly sourced” “junk journalism” with “numerous factual errors,” written by “an author devoid of credibility.”

But Hannity gushed over Klein’s bona fides. (All transcript excerpts below, via FoxNews.com):

HANNITY: But you have background as a real reporter. What—you were the...

KLEIN: I was the editor-in-chief of the New York Times magazine, the foreign editor of Newsweek.

HANNITY: What happened to you? I mean, you became normal.

Hannity didn’t mention that Fox’s sister company, HarperCollins, took the unusual step of canceling one of Klein’s books because of concerns about his reporting.

Hannity sounded more like a Trump/Klein publicist than any cable news host with even the slightest concern for truth and ethics:

HANNITY: One of the big issues you deal with in the book, Ed, has to do with Hillary’s health and it’s far worse...

HANNITY: ... than what we know, in that, for example, you think she—first of all, you confirm she has arrhythmia.

KLEIN: She has a heart valve problem that the doctors wanted to replace the heart valve and she didn’t do it because she’s afraid that...

HANNITY: That could result in death!

KLEIN: And she’s got clotting problems.

HANNITY: Well, we know that. She’s on lifetime coumadin, an anticoagulant, but that—but wait a minute. If she has a bad valve...

HANNITY: ... any good doctor is going to say, you’ve got to replace it.

KLEIN: They did. And she said no because she was worried that if she had, it would leak out that she had a surgery and that would somehow undercut her presidential race.

HANNITY: In the book, you also talk about her going and having privacy within a New York hospital, like, they sneak her in the back, underneath—I guess underneath the hospital (INAUDIBLE) private area.

KLEIN: They do that for a checkup, yes.

Wait a minute! What happened to Clinton’s brain damage? In the days leading up to the September 26 presidential debate, Hannity was obsessed with Clinton’s supposed brain damage: For example, on September 22 and again on September 25, Hannity insisted that a video of Clinton bobbing her head was proof of her “twitching and twitching.” On August 8 and August 10, Hannity suggested she had suffered a “mini seizure.” This, despite the fact that AP's Lisa Lerer, who was there during the incident, unequivocally debunked the right-wing talking point and reported that Clinton had been kidding around with reporters and exaggeratedly bobbing her head for comic effect.

Hannity was so earnest about his “diagnosis,” that when CNN’s Brian Stelter blasted him for “reckless speculation,” Hannity responded by attacking Stelter as a “pipsqueak” who should be fired. Hannity even suggested he might sue CNN over it.

So why didn’t Hannity ask Klein about Clinton’s brain health? After all, if she’s got a serious heart problem, accompanying brain damage should seal her presidential fate, right?

I think we know why: because despite Hannity’s best efforts to spin the debate as a win for Donald Trump, it has become common knowledge that he lost. And the only debate outcome worse for Hannity’s beloved than losing would be a loss to a brain-damaged competitor.

But Hannity did not have to worry about being called out on this issue by Democrat Schoen. Schoen’s only concern seemed to be that talking about Clinton’s health wouldn’t help Trump:

SCHOEN: Here’s the thing. When Donald Trump mimics her falling down and trivializes, in a certain sense, the serious issues that are getting raised, all that happens is we lose focus on change, corruption and the need for a new direction, which are his issues and his themes.

Given Klein’s previous works of “junk journalism”, it could very well be that his claims are totally bogus. However, in these days of Standards for Privacy of Individually Identifiable Health Information/HIPPA, couldn’t outing someone’s private health info be considered illegal?

Kevin Koster commented 2016-10-05 00:02:27 -0400 · Flag
This is what we’ve been expecting since Trump belly-flopped last Monday. Hannity is in a full panic now. He has no actual substance to discuss and is turning to other Clinton/Obama haters like Ed Klein to lay on as much mud as possible. Hannity did the same thing in October 2012 when he realized how far behind Romney was at that time. He just went to the smear merchants and had a bit of a wallow. The end result was still the same – Hannity wound up sounding bitter and sullen the night after the election, and he continued in that vein for some months afterward. As I expect he will do this year – although one does have to wonder if Hannity will stay on a Roger Ailes-free Fox News, particularly if Trump tries to start a new channel of his own.

The only thing more desperate than Hannity’s ragefest was the right wing hysteria over what they hoped would be the major Julian Assange/WikiLeaks “October Surprise” nearly 24 hours ago. Enough to have fellow spirits of Hannity like Alex Jones openly jumping up and down to see what goodness might come their way from a group they’d repeatedly condemned in the past. Except that WikiLeaks isn’t releasing anything at this time, and may not have anything to release for some time. Even after the right wingers were led to believe by Assange that he had some major bombshell to unleash. I particularly enjoyed the Republican who quipped “We got Rick Rolled”…

To Hannity, that’s no big deal, I guess.