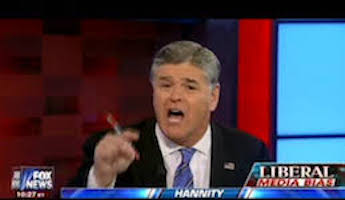 It’s hard to think of anyone who hates on America more than Sean Hannity. The guy who supported rancher Cliven Bundy’s armed insurrection against the federal government, who smeared a murdered DNC staffer, apparently to get the Russians off the hook for leaking DNC emails to Wikileaks, now can hardly wait to bring on a resurgence of coronavirus (which he previously characterized as a hoax). While he broadcasts from a safe, remote location. All that in addition to his regular, run-of-the-mill hate mongering on the air.

But if there’s one guy Hannity loves and worships, it’s Donald Trump. In a run-up to Trump’s almost-certain Flynn pardon, Team Trump is making believe that Flynn is the victim of a corrupt FBI. Their latest pretext is some newly released FBI documents which, as Vox’s Aaron Rupar explains, are not the bombshell the Trumpers are making them out to be.

In an excellent CNN analysis, Marshall Cohen noted that the whole pardon-Flynn effort amounts to Trump “trying to rewrite history” in order to “delegitimize the damning findings about his own behavior by former special counsel Robert Mueller.”

Hannity took that to a nearly comical extreme yesterday when he suggested that crooked Flynn should head the FBI.

Media Matters caught the remarks on Hannity's radio show yesterday. It began with a dishonest framing:

HANNITY: So, how did we get to a guilty plea? Well, it’s simple. Well, and this is the way corrupt prosecutors and corrupt individuals in law enforcement work and it’s not the majority, it’s the one percent that abuse power. They just go in and they twist your arm and they say, well, if you don’t sign this paper, admitting you lied to us, then we’re just gonna have to after your son who was in business with you and were gonna prosecute him.

What Hannity “forgot” to mention is that Flynn’s son, a proponent of the Pizzagate conspiracy theory, was integrally involved in his father’s shady dealings and thus a deserving subject of FBI scrutiny in his own right.

Then Hannity painted Michael Flynn Jr. as some kind of FBI hostage, more ethical than the current FBI director, and who, therefore, deserves to replace him.

HANNITY: Now, I ask all of you mothers and fathers out there, what are the odds that a father is gonna fall on the sword if it means to save his son. So they didn’t think he lied so they make him admit something that is a lie so that he protects his own son. By this point, he is bankrupt. By this point he has to sell his home. By this point, he’s got nothing left. You know, a 33-year career, culminating in being the national security adviser, maybe he should be the new FBI director because I don't see a lot of urgency in Director Wray. I'd like some answers from him.

Hannity continued by attacking FBI Director Christopher Wray for not “cleaning up the mess.”

Here’s a few more facts Hannity conveniently overlooked but CNN’s Cohen did not: Flynn told two judges, under oath, that he was guilty; He was a pro-Turkey lobbyist (working closely with his son) while serving as national security adviser to Trump and then lied about that to the Justice Department; Flynn got a strong plea deal from the FBI (prosecutors originally recommended no jail time). Last but definitely not least, Flynn provided the Russia investigation with evidence against Trump.

There’s one more very inconvenient truth to Hannity’s phony-baloney Flynn sanctimony: Trump is the one who fired Flynn. If that was a big mistake, then we are all owed a big explanation.

But don’t hold your breath.

You can listen to Hannity’s latest love for a lawbreaker below, from the April 30, 2020 The Sean Hannity Show, via Media Matters.

Eyes On Fox commented 2020-05-01 14:29:27 -0400 · Flag
I don’t watch much Fox News any more (today is an exception) but do frequent their homepage. It was interesting Flynn sizzled on the stage but the story aged quickly off their homepage without the usual saturation punditry follow-up. Then yesterday Trump validated the story by telling reporters he’d consider rehiring Flynn and magically it was their masthead story last time I checked.

More prominent than Tara Reade but I suspect they’re still trying to figure out how to handle that landmine given Trump’s sordid history. So far their narrative appears limited to Democrats are hypocrites because they said we must always believe the woman. I’ve seen three Fox pundits say essentially apply that lesson to Kavanaugh but not Trump (eye roll).

Back to Flynn it gets back to a Fox truism I’ve worn out here: It’s not what Fox News is telling you you need to worry about, it’s what they’re not telling you.

So, true enough, there’s a note Fox singles out where an FBI agent is basically saying do we play it straight or go all out to get him to lie to entrap him. Forget the fact if we let all the criminals out of jail over similar aggressive police conversations we wouldn’t have to worry about having enough space in our prisons and jails for safe social distancing.

What they leave out – like Ellen’s best pal Gregg Jarrett – is there’s also a note about the FBI better play it straight or the White House will freak out. The rest is the history Ellen documents.

Not that any of this will affect whether or not Trump eventually pardons Flynn. As always, timed when it ever spits out of his gut.

The full list of facts about Flynn, stuff that the FBI let him off the hook for in exchange for the guilty plea, would flood the airwaves, absolutely establishing the level of treason involved in the whole dirty business.