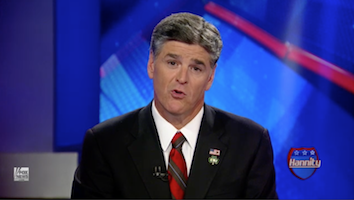 States’ rights has long been code for anti-integration. Sean Hannity made "county rights" sound like "states rights," with the exact same inference, with some help from Fox News "reporter" Ainsley Earhardt. Together, they insinuated that the Obama administration wanted to force integration on Westchester County. Hannity’s very troubling record on race has long flown under the radar screen. Let’s hope with this blatant stand for segregation it will get more attention.

For a bit of context, I’ll remind you that Hannity is the guy who palled around with a white supremacist early in his radio career. More recently, he has palled around with Rev. Jesse Lee Peterson who literally thanks God for slavery.

So it’s not a huge surprise that Hannity should jump to the defense of Westchester County over its dispute with the federal government over low-income housing. What is something of a surprise – even for Fox – is that Earhardt should prove such a willing accomplice via a “special investigation” that was at least as notable for what it didn’t report as for what it did.

Hannity made it clear he was only interested in one side of the story when he announced in his introduction, “It is a case of big government overreach… Now, it’s (Westchester County's) right about local governance as the Obama administration officials fight to impose their vision of so-called diversity.” I’m sure it was bonus points that it’s a black president’s administration fighting for what Hannity was eager to portray as over-reaching for diversity.

In a July, 2011 article in Salon.com called, "Segregation in the land of limousine liberalism," author Daniel Denvir noted that chi-chi Westchester county is one of the most segregated in the country He wrote:

This is the case even though Westchester's leaders signed a landmark consent decree in 2009, settling a lawsuit that accused the county of lying to the federal government about fair housing in its applications for federal funds. Officials agreed to build 750 units of affordable housing in the county's whitest neighborhoods and to market the properties to potential black and Latino buyers. The court order also requires the county to analyze impediments to fair housing and to design an implementation plan to overcome them -- with a stipulation that the county use all of its housing programs to support integration.

At the time, the agreement was celebrated as a milestone in fair housing and civil rights. But two years after the court order, Westchester had done nothing but ignore it. The county's Republican-led government refuses to force predominantly white towns and villages to build fair housing; affordable units slated for construction are in largely nonwhite neighborhoods or commercial sites, exclusionary zoning ordinances remain in place, and the county has failed to submit a compliant plan to desegregate.

The original consent decree was signed by the previous (Democratic) county executive. The current, Republican replacement is described in the article by one of the litigants suing to make the county comply as “more openly and brazenly noncompliant."

But somehow all that context was lost on Earhardt whose report may as well have been written by Hannity and his pal Rev. Peterson.

She went on to report that the administration wants the county to urge banks to relax lending standards, “a policy instrumental in causing America’s financial meltdown.” She also brought up some old dirt on the HUD officials. Meanwhile, she completely overlooked claims of fraud against Westchester County.

However, she did find time to racially fear monger against Obama:

“Worse still, these officials are vowing to take their plan for Westchester County national.”

Hannity followed that with an interview with that current Republican county executive, Robert Astorino, who, of course, gave his side only – and pimped his website.

“Anybody of any race, any religion, any color, any creed can get one of these units,” Hannity said. “There’s no discrimination.”

Astorino insisted, “We’re the fourth most diverse county in New York State. We are as diverse as Manhattan.” Except that he forgot to mention it’s segregated.

"Westchester looks like South Africa," countered (general counsel at Westchester's Enhanced Section 8 Outreach Program, Jerry) Levy. "There are black townships and white neighborhoods. This is one of the most severely segregated communities."

Indeed, Astorino last year vetoed legislation that would bar landlords from discriminating against Levy's clients, holders of Section 8 housing vouchers -- a move that seemed to contradict the consent decree's requirement that the county use all housing programs to further fair housing.

Somehow, that never came up either.

“What are they trying to do here?” Hannity asked. “Is this the equivalent of affirmative action?"

(This post was originally published September 8, 2011 and republished, with minor changes, under our current CMS on June 22, 2018)