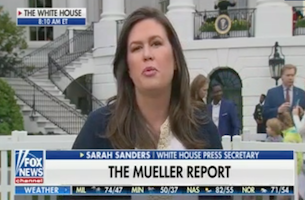 After the Mueller exposed her lie about the firing of James Comey, Sarah Huckabee Sanders is now lying about what CNN’s April Ryan said when she called for Sanders to be fired.

I will acknowledge that Ryan did not make a great choice of words when she called for “lopping the heads off” at the White House, in the wake of the Mueller report revelation last week, especially that of lying liar Sanders who is on the public payroll. But a) it was clear that Ryan was demanding Huckabee Sanders be fired, not physically harmed, and b) the poutrage is beyond hypocritical for someone who supports and enables Donald Trump’s actual and explicit suggestions of violence against the media and others.

That Huckabee Sanders has suddenly turned April Ryan’s comment into a call for decapitation. Not surprisingly, the sycophantic hosts on Fox & Friends helped validate Sanders’ latest bit of dishonesty and hypocrisy.

Even Fox News producers tacitly acknowledged the truth about Ryan’s comments. The lower-third banner read, “CNN ANALYST CALLS FOR SANDERS TO BE FIRED.” You know they would have mentioned "beheading" if they thought they could get away with it. 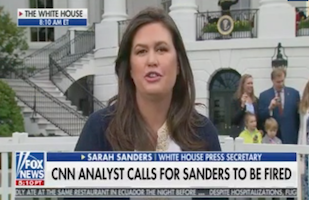 Asked for her “reaction” to Ryan’s comments, Sanders – who never seems to have had a problem when her boss tweeted a video showing him body slamming “CNN” nor of a cartoon of a train hitting a CNN reporter – was suddenly oh, so sensitive to inflammatory language. In fact, Huckabee Sanders’ fee fees were so hurt that she lost sight of the truth. Again.

SANDERS: Look, I've had reporters say a lot of things about me. They've said I should be choked. They said I should deserve a lifetime of harassment, but certainly have never had somebody say that I should be decapitated. This takes us to a new low even for the liberal media. I think it just once again proves why this journalist isn't taken seriously.

There was no pushback from any of the three cohosts.

But even that wasn’t enough dishonesty for Sanders. She went on to pretend that she was taking the high road, again without challenge:

SANDERS: I think our team needs to remain focused on how we keep pushing those things that actually help Americans and not engage in these petty fights with journalists, simply that again shouldn't be taken seriously, I don't think are taken seriously, and are just looking for a couple more minutes on TV. And frankly, I feel sorry for them because they have lost the collusion battle. And now they're looking for anything they can hang on to keep this story alive, and frankly I think it's time to move on. I think the country is ready to; they have been for the last two and a half years.

Here’s a little more truth for Sanders: The “collusion battle” is not over and you haven’t won. Oh, and there are lots of other serious investigations into Trump World still going on, too.

See the latest reason why this woman is unfit to be on the public payroll below, from the April 22, 2019 Fox & Friends, via Media Matters.