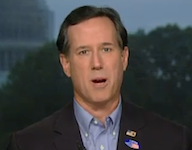 Rick Santorum visited Fox News on Election Day to help talk up voter ID laws and other, similar restrictions. But Santorum gave Fox a bonus by not just promoting the laws but also by smearing their opponents as voter fraud supporters. Or worse.

Host Neil Cavuto set the tone by complaining in his opening statement: “It always becomes, as you know, Senator, a racial issue or you’re bigoting against someone. But you would think with all these latest concerns, that would be very simple to do.”

Santorum agreed. “It’s very simple. I mean, you need an ID to be able to buy cough medicine. You need an ID to go on a train or a plane. I mean, these are basic things that Americans understand that we want to limit fraud and at a time when confidence in our government is so low, we don’t need also a lack of confidence in whether the elections are also valid or not.”

Santorum said that he had voted that day and, “It was not a big deal.”

But neither Santorum nor Cavuto are the types of people voting restrictions have negatively impacted. Those people are typically people of color, young voters, and women.

“To say that somehow or another this is a conspiracy against certain groups of people is just ridiculous,” Santorum continued. Then he delivered his smear: “It tells you that maybe there is fraud going on and there’s some folks who just simply don’t want to protect against it.”

In reality, voter fraud is a "very rare phenomenon."

But instead of challenging Santorum’s baseless smear, Cavuto moved on to give Santorum some 2016 love. Cavuto said, “I talked to your friend and financial backer Foster Friess, who made it very clear to me that should you run, he’s 100% behind you. ...If you entertain another Presidential run, he would be there for you, he likes your style and commitment to the issues, your pro-life position.”

After Cavuto also gave Santorum a chance to expain why he’s a viable 2016 candidate Cavuto said, “You won Iowa last time. …You poll very well in Iowa, so that seems to me the green light for another Presidential run.”

Watch the segment below, from the November 4 Your World.

NewsHounds posted about Santorum Suggests Those Who Oppose Voting Restrictions Are Supporters Of Voter Fraud on NewsHounds' Facebook page 2014-11-09 15:25:28 -0500
Digusting.