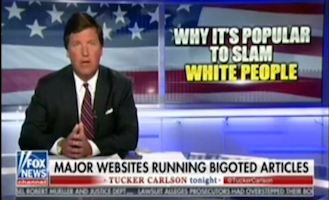 Tucker Carlson may be losing advertisers over his prime time white nationalism and hate mongering, but a lot of Republicans not just adore it, they think he’d make a terrific president.

From a June 2 Politico article:

Tucker Carlson’s audience is booming — and so is chatter that the popular Fox News host will parlay his TV perch into a run for president in 2024.

Republican strategists, conservative commentators, and former Trump campaign and administration officials are buzzing about Carlson as the next-generation leader of Donald Trump’s movement — with many believing he would be an immediate frontrunner in a Republican primary.

Personally, I do not think Carlson will run. But my point here is how many think this bigoted liar would be just fab as commander-in-chief, not whether he will or won’t throw his hat in the ring.

“Tucker Carlson Tonight” is currently the most watched cable news program in history, according to the second quarter ratings released this week. And on Fox News’ YouTube channel, Carlson’s segments from the past quarter have drawn well over 60 million views and are among the most popular videos in the eight years since the network began posting on the platform.

“The angry children you watched set fire to Wendy's and topple statues and scream at you on television day after day are truly and utterly stupid,” he said on his show last week. And he has repeatedly pushed back on the idea that racism is systemic in the country. “Overall, this is the least racist country in the history of the world,” he said a few days earlier. “Millions of Africans want to move here. Many already have. Our last president was black. What are you talking about?”

A Republican strategist close to the White House added: “If you are a Republican politician and you want to know where Republican voters are, all you have to do is watch Tucker Carlson every night.”

This is one of many reasons I do not support advertiser boycotts. They do nothing to address the appetite for the poison Carlson and his right-wing buddies spew. In June, I reported on a new round of departures by such major advertisers as Disney and T-Mobile (with a very public FU from the CEO) from the Tucker Carlson Tonight show after the host attacked George Floyd and the protests over his death. Yet here we are.

In case you’re not familiar with Carlson’s white nationalism, the video below, via Carlos Maza and Vox, does a great job of showing how Carlson makes it look mainstream. Now, there is no doubt that it has become mainstream.

Tucker Carlson's teaching his audience to view any difference as a threat — and white supremacists love him for it. pic.twitter.com/2xlSnvoAKk