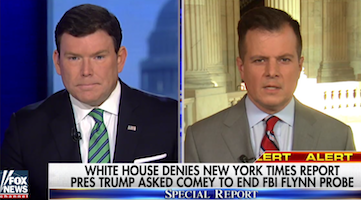 You know things are not looking good for Donald Trump when a Fox News correspondent can’t find a single Republican member of Congress willing to go on the air to discuss the Comey memo reportedly noting that Trump asked him to drop an FBI investigation into Michael Flynn.

From this afternoon’s bombshell, via The New York Times:

President Trump asked the F.B.I. director, James B. Comey, to shut down the federal investigation into Mr. Trump’s former national security adviser, Michael T. Flynn, in an Oval Office meeting in February, according to a memo Mr. Comey wrote shortly after the meeting.

“I hope you can let this go,” the president told Mr. Comey, according to the memo.

The documentation of Mr. Trump’s request is the clearest evidence that the president has tried to directly influence the Justice Department and F.B.I. investigation into links between Mr. Trump’s associates and Russia. Late Tuesday, Representative Jason Chaffetz, the Republican chairman of the House Oversight Committee, demanded that the F.B.I. turn over all “memoranda, notes, summaries and recordings” of discussions between Mr. Trump and Mr. Comey.

Such documents, Mr. Chaffetz wrote, would “raise questions as to whether the president attempted to influence or impede” the F.B.I.

On Special Report today, anchor Bret Baier issued “a Fox News alert” about the breaking story from the Times before noting, “We are trying to get reaction on Capitol Hill.” Clearly, he meant he was trying to get reaction from Republicans. As Capitol Hill correspondent Mike Emmanuel later noted, they had already gotten reaction from Democratic Congressman Adam Schiff, ranking member of the House Intelligence Committee and independent Senator Angus King (who floated impeachment). Also, Democratic Rep. Jerry Connolly spoke to Special Report.

EMMANUEL:  It’s been stunning up here on Capitol Hill. Typically, this rotunda on a busy news day would be full of senators coming and going from the live cameras. It’s been very, very quiet – eerily quiet here on Capitol Hill. The only people that I’ve seen so far have been Senator Angus King, an independent from Maine who did a quick interview and was off, and Adam Schiff, the top Democrat on the House Intelligence Committee was also up here doing an interview but we had him on our air earlier.

I’ve called countless senators’ offices and for one reason or another, they’ve all said that they’re not available to come on and talk with us. Some have had dinner meetings, some have had other off-campus obligations. Whatever it’s been, none have been available. I’ve asked for reaction. I have not gotten any.

I’ve called countless House offices as well and been told that the member’s not available, not able to come on the air. And so you get a sense that a lot of members coming back from their weekends at home, their recess, if you’re a House member, getting back from a week-long recess, and a lot of them were upset to hear the latest headlines from The New York Times last night.

Senate Majority Leader Mitch McConnell today essentially said he wanted to talk about other things on the agenda such as tax reform, health care reform and other issues that they’re trying to get done up here and he asked that there be less drama from the White House. A lot of Republicans at this point not coming to the cameras, perhaps wondering what may be next to come out on this latest story.

I should note that The Story, the show that follows Special Report, had Republican Senator Jim Risch and Republican Rep. Trey Gowdy. A special late edition of Special Report included Republican Jason Chaffetz, who just demanded the FBI documents. And Gowdy was supportive of Comey. I’ll have more on that in a later post.

Watch Emmanuel reveal that no Republicans were willing to talk on the air below, from the May 16, 2017 Special Report.

What I want asked – of The Donald himself- is what’s with his political fetish with the Russians?

Maybe the conventional wisdom is correct and Putin has that piss video of him with Russian prostitutes. Or maybe he’s Putin’s Manchurian Candidate.

But I see the grifter being all about himself and I know he’s been frustrated for many years unable to do business in Russia. So I wonder if it’s something as simple [and corrupt] as him hoping to build Trump Tower Moscow?

Bret Bauer [or more likely sycophant Steve ‘Brown Nose’ Doocy] please ask that question the next time Trump shows up on his [only] favorite news network for a game of softball.