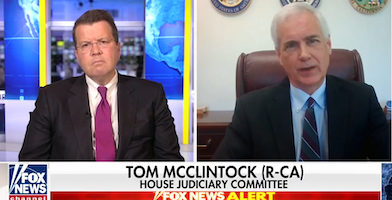 Rep. Andrew McClintock (R-CA) not only seems to think that Trump won the two Supreme Court cases that Fox’s own judicial analyst thinks he lost, McClintock thinks there’s no reason Americans should know whether Trump is financially beholden to any foreign country.

Earlier today, Fox’s own judicial analyst opined that Trump lost both cases. Napolitano also predicted that Trump’s financial records would be turned over to New York District Attorney Cyrus Vance before the election.

In his analysis of the two decisions today, NPR’s Domenico Montenaro wrote, “Overall, it’s a big loss” for Trump. While we are unlikely to see Trump’s tax returns before the election, that “may be beside the point, because allowing a New York grand jury — and a motivated district attorney — to mine his records could jeopardize his brand, the fortune he built and even possibly his children, who work for the Trump Organization.”

Montenaro also highlighted some possible probes that could prove very damaging to Trump.

Trump threw a Twitter temper tantrum over the rulings so he obviously didn’t see them as a win.

But McClintock insisted Trump had been exonerated from a Democratic witch hunt.

MCCLINTOCK: Frankly, I think these are big wins for the president. In the Vance case, the Supreme Court said what it’s been saying for more than 200 years. The president, just like everybody else, if he has evidence relevant to a case, that is subject to subpoena. But the court also said that just like every other person, the president is protected from among other things, subpoenas issued in bad faith. The Vance investigation reeks of bad faith. … The Supreme Court didn’t say turn over the documents, the Supreme Court said go back to the lower court and make your case, and I think that’ll be a case very easy to make.

And with the respect to the Congressional fishing expedition, where the Democrats subpoenaed every check, every credit card swipe, every debit withdrawal by every member of the Trump family, the Court said you know this kind of looks like a fishing expedition to us. They imposed a four-part test that makes it impossible for the Democrats to continue with those subpoenas.

Cavuto suggested that Trump looks like he’s covering something up with the next question: If “there’s nothing untoward or illegal” (of which there’s no evidence, Cavuto stressed) in Trump’s financial records, couldn’t he have “avoided all of this” if he had only released some of his financial information, given that he’s “the only prominent candidate who hasn’t in modern times?”

MCCLINTOCK: I don’t think that would have been wise because the pattern the Democrats have established shows us they will look for anything pulled out of context and use it. Someone with the extensive business empire of the president is going to have a very, very large bank of accountants and lawyers preparing the tax records. There’s probably nothing untoward in them.

I think what he realizes is, they’ll use anything they can get, even something that’s perfectly legal and above board. …

These are all personal attacks against Donald Trump, not one of them has to do with public policy matters that actually affect people’s lives.

Actually, if it turns out that Trump is obligated to Putin, e.g., that might be why he did not protect U.S. troops from Russian bounties on their lives, e.g.. Surely McClintock knows that.

But for good measure, McClintock concluded by blaming Democrats for the economy, saying it was doing well until “COVID lockdowns by Democratic Governors.”

You can watch McClintock put loyalty to Trump over America below, from the July 9, 2020 Your World.