Rep. Biggs: Birx And Fauci’s ‘Time Of Usefulness Has Expired’ 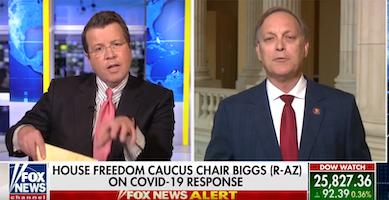 Rep. Andy Biggs (R-AZ) clashed with Fox host Neil Cavuto as Biggs chose loyalty to Donald Trump over science and the health and safety of his own constituents, even as Arizona faces a record number of coronavirus cases.

Yesterday, the AP reported that Arizona “broke several of its own records for new cases, deaths and hospitalizations. The number of new cases hit 4,878 — a number comparable to recent daily case totals in larger states such as Florida and California, which have three to six times as many people.”

Biggs, of course, brands himself as pro-life, but he couldn’t have seemed less concerned about the lives of Arizonans who are not still fetuses during an appearance on Fox News’ Your World.

First up, Biggs dismissed the need to wear masks. He said, “If masks work so well, then why is L.A. spiking and surging with COVID cases when they’ve had a mandatory mask regulation in effect for seven weeks now? There’s no empirical evidence that that’s the case.”

Cavuto interrupted to say that a lot of people have been ignoring the mask requirement.

But Biggs, who is not a physician, insisted he knew better. “I’ve reviewed three scholarly literature reviews that have reviewed more than 90 studies of the efficacy of masks, and they’ve come to the same conclusion: There’s only one mask that has any efficacy at all and that’s the N95, and that does not have a hundred percent rate.”

This pulmonary and critical care medicine specialist who worked as an emergency volunteer caring for COVID-19 patients in New York City disagrees, but what would he know?

Cavuto challenged Biggs: “You don’t think it has any benefit at all, Congressman? A lot of people of all political stripes and backgrounds are saying the issue isn’t so much for protecting the person who’s wearing the mask, but the person they’re coming in contact with.”

Then Cavuto moved on to question Biggs for having called for ending the White House Coronavirus Task Force “because they’re not echoing the president’s economic concerns. Do you think that’s risky?”

No, "pro-life" Biggs didn’t. “I appreciate what the vice president’s done, I think he’s done a great job," Biggs said. But he didn't appreciate the doctors. He accused Dr. Anthony Fauci of having “been all over the ballpark on this," because he said "a couple of months ago you shouldn’t wear a mask if you’re healthy. Then he said that wearing a mask is merely a symbol, and then he said no, everybody needs to wear a mask. Everything has been inconsistent with him.”

FACT CHECK: The about-face was not some whimsical change of heart, as Biggs suggested. The Mayo Clinic explained that originally, “experts didn't yet know the extent to which people with COVID-19 could spread the virus before symptoms appeared. Nor was it known that some people have COVID-19 but don't have any symptoms.”

Cavuto ran through some statistics around Arizona's surge in cases. "If you look at the number of cases on just the past seven days, per 100,000, Arizona ranks number one at 39.1 daily new cases per 100,000. Furthermore, the spike has picked up double-digit steam in the last two weeks. You have hospitalizations and ICU-bed use the highest of this crisis.” Then he added, “People are listening to you and you’re saying we can ease up.”

CAVUTO [starting to shout]: I’m not cherry picking anything, Congressman….

CAVUTO: …You right now have the nation’s highest caseload on a percentage basis.

Biggs conceded that Arizona has “the highest number, perhaps on a per capita basis of new cases.” But, according to him, that's no biggie because there has been a big reduction in the rate of hospitalizations in the last three weeks and a lower death rate. “Every day we’ve had an increase in the number of discharges” from the hospital and “We have actually had a reduction in the last two days in the ICU bed usage,” he said.

“I think that [Drs.] Birx and Fauci have gone well past their - they’ve expired. Their time of usefulness has expired,” Biggs sneered. “They engender panic and hysteria and undermine what the president’s doing.”

“Doesn’t he have a commission because he defers to them as the health experts and they’re citing worries?” Cavuto persisted. “Isn’t that what doctors do, kind of look after people’s lives?”

BIGGS: When’s the last time Dr. Fauci met with and treated a patient on an individual basis or Dr. Birx? …

BIGGS: I’m not a trained physician. …

CAVUTO: But you’re telling the ones who are to get out. …

BIGGS: What I’m saying is, the task force may not be necessary anymore, and what I’m saying is Dr. Fauci and Dr. Birx have undermined what this president’s trying to do.

Notice that Biggs didn’t say that Fauci and Birx have undermined anyone’s health?

You can watch Biggs prove he’s more pro-Trump than pro-life below, from the July 2, 2020 Your World.

Lawrence Geller commented 2020-07-03 11:14:43 -0400 · Flag
It would be poetic justice/righteous if Biggs were to contract COVID after having a MAGA hatted idiot who after refusing to wear a mask coughed in his face. Long Live Free-Dumb!

Bemused commented 2020-07-03 04:09:50 -0400 · Flag
Dereliction of duty, anyone? I’ve always been perplexed by the propensity of American politicians to claim they know everything better than anybody, especially anyone who may have decades of study, research and hands-on experience.
While I’m not much impressed by Dr. Birx, I remain in awe at Dr. Fauci’s ability to keep on telling it as it is without getting fired by the very person who is spreading misinformation. By now, however, Dr. Fauci has established his credentials so I’d like to see him get really angry at the purveyors of misinformation. Starting with the senile toddler, himself.