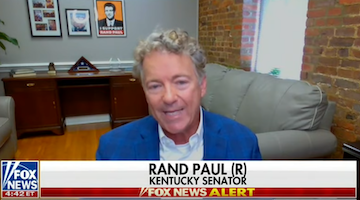 As far as Sen. Rand Paul is concerned, government should stop helping suffering Americans during the coronavirus pandemic, “let the economy open up, and let individuals assess their risks and act accordingly.”

Paul appeared to reject calls for another stimulus bill when he visited Fox News’ Your World show today.

Host Neil Cavuto called Paul, “quite a fiscal hawk when it comes to such matters” before asking if he was for more stimulus.

Paul seemed to “forget” about how Trump’s tax cuts ramped up the deficit as he whined about spending money on Americans suffering during the pandemic crisis.

PAUL: We have no money, Neil. There’s no rainy-day fund, there’s no savings account. … The $3 trillion we’ve already sent to people because of this government-mandated depression has been borrowed. … It’s a really, really rotten thing to do. …

But it’s not the government causing the recession, it’s the coronavirus. The Fed fears a COVID-19 resurgence will cause a deeper recession.

Cavuto brought up the subject of extending unemployment benefits, which he suggested are currently too kind to laid-off Americans. He called them “very generous on the federal level or what some of your Republican colleagues have come up with, an incentive to get people to go back to work.” Cavuto added, “You’re against both.”

Paul seemed to think that Americans are so lazy and unethical that it’s better to make them suffer than to risk giving anyone money he or she didn’t earn.

PAUL: If you pay people not to work, they won’t work. If you pay people more not to work than to get for working normally, they won’t work. It’s called institutional unemployment. … If the Democrats get their way and unemployment goes on for months and months and months if not years, what will happen is nobody will work for less than $50,000 in this country because you can get that for not working. The Republicans’ idea only slightly less stupid. The Republicans are going to give you a bonus to go back to work but where are they getting the money? They’re going to borrow it from you.

The House passed the Heroes Act, and it’s stalled in the Senate. Here’s what’s in it.

You can watch Paul’s heartlessness below, from the July 14, 2020 Your World.