Pirro And Carlson Ratchet Up Smears Of Roger Stone Judge And Juror: ‘Everything In My Gut Tells Me She Wanted To Get On That Jury’ 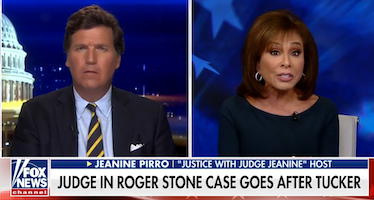 Tucker Carlson responded to the harsh criticism from Roger Stone judge Amy Berman Jackson by calling for her impeachment while Jeanine Pirro baselessly accused the forewoman of lying to get on the jury and convict Stone.

As I wrote in my previous post, Jackson criticized Carlson for deliberately endangering the forewoman of the jury during a hearing for Stone’s request for a new trial. But during the hearing, it was revealed that Stone’s own attorneys had not bothered either to question her about her response on her juror’s questionnaire that she was “not sure” whether she had many any public statements about Stone or the Russia investigation. Nor had the attorneys done a simple Google search to find the statement that they now claim has so tainted the entire jury that a new trial is warranted. Nor had they objected to her presence on the jury.

Furthermore, one of the other jurors has written a column in The Washington Post about the fairness of the process and how the attacks undermine the jurors’ service and the rule of law.

But those facts mean nothing to Carlson, apparently. He and Pirro responded to the judge’s rebuke by upping the smears:

CARLSON: Amy Berman Jackson is the Federal judge who oversaw the case. She was appointed by Barack Obama. She is an openly partisan Democrat. She has made no attempt to hide that.

Jackson allowed the foreman of the jury to lie about her political background which in a normal court of law would have disqualified her immediately. But Jackson let her stay and then defended her.

FACT CHECK: The liar here is Carlson, not the juror who said she wasn't sure about what she may have previously stated. If anything, Stone’s legal team seems to be the negligent party for allowing this supposedly dangerously biased juror on the jury without objection.

Again, Carlson didn't allow any stinking facts to get in the way of his grudge or his desire to get his longtime pal off:

CARLSON: Amy Berman Jackson is a disgrace to the judiciary. It's frightening that in a country like ours, she has power and she does.

What’s really frightening is that a bigoted, dishonest, vicious dissembler like Carlson has the power he does.

Carlson went on to whine about Jackson’s criticism by claiming that other media outlets had published the juror’s name, “all of which, of course, Jackson approves of because they're on her side.” He didn’t bother to back up his claim. Instead, he claimed – also without bothering to back up his attack – that Jackson’s criticism of his attacks on the juror as "antithetical to our system of justice" … “proves that not only is Amy Berman Jackson corrupt, dishonest and authoritarian, and she is definitely all of those things, she also has no sense of self-awareness whatsoever.”

Pirro, not exactly a beacon of morality, was all in on the dishonest smear. She either ignorantly or deliberately mischaracterized the judge’s criticism of Carlson as concern for herself (it was for the juror). “Everything that you said about her is accurate and right on point,” Pirro said.

Pirro is a former judge but she acted as though the seven guilty verdicts against Stone were unanimous. Instead, she acted as though the one juror was responsible for all of them. And, of course, Pirro somehow ignored the comments of the forewoman’s colleague in his Washington Post editorial stating that the process was fair and aboveboard.

“Everything in my gut tells me [the forewoman] wanted to get on that jury and denied doing anything that was partisan,” Pirro baselessly claimed. “Shame on the judge.”

It seems unlikely that a juror trying to hide her bias would have written on a jury questionnaire when asked if she had written anything for public consumption about Stone or the Mueller investigation, "I can't remember. I may have. I'm honestly not sure.” But Carlson and Pirro tossed out reason and logic, along with the truth, in their zeal to smear and tear down.

CARLSON: Shame on the judge. She should be impeached. She's corrupt. She's out of control ...

CARLSON: It is terrifying that someone like that sits on a Federal bench. Roger Stone needs a pardon.

You can see who's really out of control below, from the February 25, 2020 Tucker Carlson Tonight.

Thx4 Fish commented 2020-02-27 13:00:28 -0500 · Flag
The idea that bias is a bad thing in jurors and judges has really gained traction among the simpletons at Fox. Perhaps because these emotional barbarians could never put aside their own biases, they assume that no one can. ‘Judge’ Jeanine certainly knows better than this.

So do we insist that these arguments are just stupid distractions, or do we start pointing out the pro-Trump bias of any jury or judge who rules in favor of Trump and his buddies?

Do I Google all the facts from the #FakeNews librul media Fox News has toxified to its audience? Debunking Fox News doesn’t work in a #MAGA post-truth America.

The Fox News tell-me-what-I-want-to-hear cult followers will believe anything – and I mean anything – mouthed by the partisan hosts on this network. We’re beyond post-truth. Americans lack critical thinking skills. I see so many examples here and elsewhere of Fox hosts, particularly the Fox & Friends circus act, saying the most transparently stupid and dishonest things imaginable and the #MAGA cult pulls out their little American stick flags and wave them furiously.