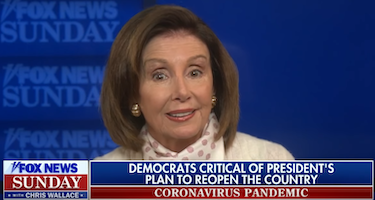 Nancy Pelosi made a rare visit to Fox News Sunday today where she blasted Donald Trump’s “weak” leadership, gave him an “F, a failure” on COVID-19 testing and tied that to the inability to re-open the country. Naturally, Trump had nothing better to do than to watch TV and rage tweet after she hurt his widdle fee-fees.

Almost every question from anchor Chris Wallace was a bit of a gotcha. In my opinion, Madam Speaker handled each one beautifully. Here, she turned Wallace’s attempt to paint her an irrational critic of Trump into a blistering critique of his handling of the coronavirus pandemic:

WALLACE: The president announced a plan this week to reopen the country and you immediately criticized it. I want to put up what you said.

"The White House's vague and inconsistent document does nothing to make up for the president's failure to listen to the scientists and produce and distribute national rapid testing."

But Dr. Anthony Fauci endorsed the plan, take a look.

(BEGIN VIDEO CLIP) ANTHONY FAUCI, DIRECTOR, NATIONAL INSTITUTE OF ALLERGY & INFECTIOUS DISEASES: If these things are done correctly, what I believe they can, we will have and there will be enough tests to allow us to take this country safely through Phase One.

PELOSI: Yes, well, he said if this were done properly. Well, it hasn't been done.

But we're way late on it and that is a failure. The president gets an F, a failure on the testing.

But Fauci -- Dr. Fauci's right. If it is done properly, it hasn't been, and I -- I think when he puts in the "if it's done" is admission that it hasn't been done.

Later, Wallace tried to suggest that Pelosi has been putting politics over public health by criticizing Trump. Pelosi blew past that to argue that Trump’s disastrous response to the coronavirus leaves her no choice:

WALLACE: Just this week, you called President Trump a weak person, a poor leader. Now, I understand that he goes after you, so this is fully a two-way street. ... But you think those kinds of partisan attacks by -- in this case -- you, are constructive in the middle of a national crisis?

PELOSI: Well, I'll tell you why it came to that. I was so prayerful on Easter. It was one of the first days I didn't have to be working every minute and I could reflect and be prayerful.

And what I decided was that the president's made many mistakes, OK. Let's have an after-action review of that. But if he continued to put forth proposals that were not science-based, continuing his, you know, what'd he say, "it's a hoax. It's magically going to go away." OK, put that aside.

But to proceed with policies which were not science-based, which are not evidence-based and to blame others -- blame anybody, blame the governors, blame me, blame the World Health Organization. Leaders take responsibility.

So I said he's a weak leader. He doesn't take responsibility. He places blames -- blame on others and that might have been OK for before, but we cannot continue down a path that is again -- I'll come back to science, science, science, evidence, data on how we should go forward.

Apparently, Donald Trump had plenty of free time on his hands today. As my colleagues at Crooks and Liars noted, he didn’t just hit back at Pelosi but also at Wallace and Fox News, apparently for letting her criticize the Dear Leader on their airwaves.

Nervous Nancy is an inherently “dumb” person. She wasted all of her time on the Impeachment Hoax. She will be overthrown, either by inside or out, just like her last time as “Speaker”. Wallace & @FoxNews are on a bad path, watch! https://t.co/nkEj5YeRjb

You can watch the interview that got Trump’s tiny Twitter fingers a-twitching below, from the April 19, 2020 Fox News Sunday.

John McKee commented 2020-04-19 23:01:42 -0400 · Flag
She’s a rare gem. God, I loathe Wallace – just occasionally the smug bastard says something just out of the company line enough to get the pundits blathering ’He’s the only impartial talking head on Fox’ and that’s enough to let him skate for a month or two, carrying out the evil agenda with the best (worst) of them. Worst of all, the pompous, self-important prick seems to think he’s getting away with his ‘above the fray’ con-job.

His interview of Pence was arselickery of the highest order.